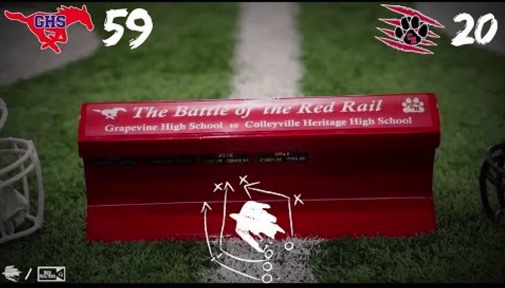 Grapevine put on a clinic and shut down the Colleyville Heritage Panthers in a dominant 55-20 win.

It was a slow first quarter as Grapevine jumped out to a 3-0 lead early while holding the Panthers defensively, highlighted by a fourth down stop inside the ten-yard line.

The offenses finally woke up in the second quarter.

Mustangs QB Cade Rhodes found Jack Ertzearly in the second to take a 10-0 lead. Meanwhile, the Panthers’ red zone struggles continued as a mishandled handoff led to a 94-yard scoop-and-score to put Grapevine up 17-0.

Colleyville Heritage hadn’t given up yet as RB Alexander Parker weaved through defenders for a long touchdown to bring the Panthers within 10. Both teams exchanged scores, led by strong running games for a halftime score of 24-14, advantage Mustangs.

Mustangs RB Roshawn Prearadded his second touchdown of the night, opening up the second half for a Mustangs 31-14 lead.

The Panthers weren’t done yet as QB Trey Flint found Jake Fexto bring their team within two scores. The Panthers’ momentum swing was soon erased as Jack Ertzreturned the ensuing kickoff for a touchdown late in the third quarter to take a 38-20 lead.

Grapevine wasn’t going to leave anything up to chance, as they scored 21 unanswered points in the fourth quarter to erase any chance of a potential comeback.

The Red Rail was clinched and so was a playoff berth as Grapevine improved to 4-1 in district play. The defense was lights out, forcing turnovers and shutting down the Panthers biggest playmaker in Kam Brown. With only one loss this season, and a chance to take the second seed in the district, it’ll all come down to a Friday night showdown against undefeated Denton Ryan next week. For now, the Mustangs will relish the fact that they’ll have postseason play to look forward to.

For Colleyville Heritage, they drop to 4-4 on the season, with a game against undefeated Birdville up next. Though the Panthers are still within playoff contention, sitting at the fourth seed, things could spiral fast if they drop the final two games of the regular season.