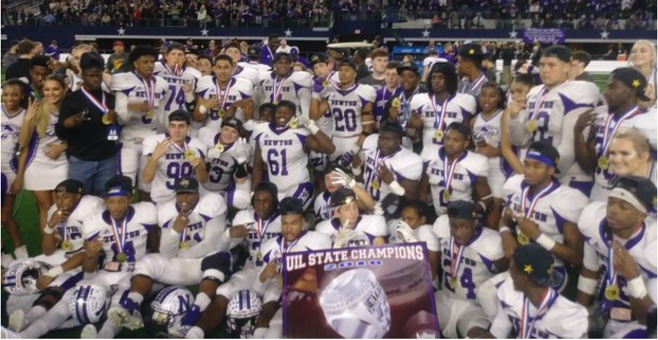 Arlington- One play stood between the Canadian Wildcats and a comeback victory.

Facing 4th-&-8 from the Newton 21-yard line Casen Cavalier rolled out to his right tossed the ball towards the end zone.

Newton DB Maliak Metoyer tipped the ball and Dominique Seastrunk came away with an interception to seal the 21-16 victory and state championship for Newton at AT&T Stadium.

Newton found themselves in unfamiliar territory during the first half. The Eagles were forced to punt on four consecutive possessions, after only punting ten times all season.

A defensive strufe unfolded throughout the first two quarters of action.

Newton made the necessary defensive adjustments and held Canadian to -1 yards on their next six possessions.

Darwin Barlowput the Eagles on his back and used his tremendous athleticism to walk a tightrope and reach the football inside of the pylon to put Newton ahead 21-0.

The Barlow touchdown was set up by Cavalier fumble that was recovered by Metoyer with 2:15 remaining in the second quarter.

Cavalier was a man on a mission in the second half for Canadian.

The Wildcats were facing fourth-and-one, when Cavalier exploded for a 36-yard run, which was the longest play from scrimmage all game for Canadian.

Newton jumped offsides and Cavalier lofted the ball 24-yards to Bill Koeting setting up first-and-goal. Cavalier would score on a 5-yard run, he would convert the two point conversion and Canadian trailed 21-10.

The Eagles’ defense made their first of many key plays, when Kevin Watson came away with a pick 6 to give Newton a 14-0 lead in the first quarter.

Canadian got a spark of life late in the fourth quarter, as Caleb Martinez recovered a fumble to give the Wildcats the ball at the Newton 42-yard line.

Cavalier connected with his favorite receivers Garrison McCook on a 16-yard strike. McCook would drop a touchdown two plays later on 2nd & 7.

Canadian would line up for a 42-yard field goal attempt, but an unnecessary roughness penalty on Newton gave them a fresh set of downs.

Newton was held scoreless in the second half and the Eagles punted the ball eight times din the game, just two punts shy of their season total.