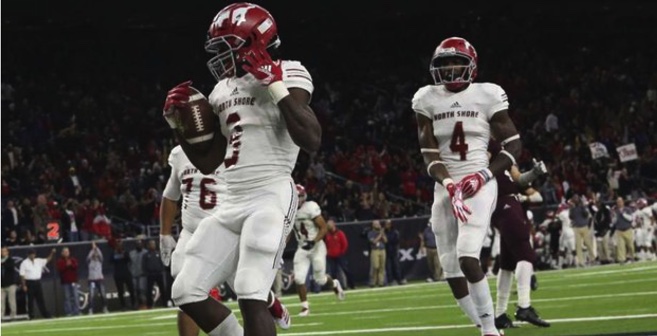 Hudson Card and Garrett Wilson had no answers for the Mustangs’ defense. Offensively, Zachary Evans proved why he’s the number one running back in the class of 2020. From kickoff, things seemed to go the Mustangs’ way.

Lake Travis opened with the ball, running out of a no-huddle offense, the Cavaliers quickly picked up first down after first down as QB Hudson Cardfound Jackson Scruggs and Garrett Wilsonfor big gains. With the help of a Pass Interference, the Cavaliers found themselves inside the North Shore 10-yard line. Unable to punch it in, Lake Travis settled for a field goal with 10:02 left in the first quarter.

North Shore wasted no time responding, after QB Dematrius Davis Jr found Zorhan Rideauxfor a 29-yard gain, RB Zachary Evansdid the rest himself, turning the corner for a 60-yard touchdown run leaving Cavaliers in the dust as North Shore took the lead with 9:34 left in the quarter. The Mustangs had the momentum and the defense rode it forcing a punt to give North Shore’s offense a chance to take a commanding lead.

The Mustangs used a more balanced attack, spreading the ball between their star receivers Ajani Carterand Shadrach Bankson their way back to the Lake Travis red zone. After penalties on both teams, a fourth and six for the Mustangs turned into a fourth and one, which the Mustangs converted and just two plays later, Evans ran in his second touchdown of the night to take a 13-3 lead.

North Shore’s defense was making light work of the Cavalier offense and Davis and Co. were back in action. After back to back punts, Lake Travis got a much needed break, forcing a fumble on Davis Jr. Inside North Shore territory for the first time since the start of the game, the Cavaliers had a chance to get back in the game. The Mustangs defense held their own forcing a third straight punt.

Recovering from the turnover, the Mustangs barreled their way into the red zone, overcoming penalties and blown up plays, for another scoring drive. Evans sped through the Cavaliers’ defense once again for a 18-yard touchdown, his third of the night.

Garrett Wilsonwas doing all he could to bring the Cavaliers back, running the ensuing kickoff 57 yards to put Lake Travis in North Shore territory. The offense continued to sputter and the punt team was back on the field within seconds. For the first time all night, the Mustangs stalled. An injury to Davis killed the drive and North Shore punted for the first time.

Davis reentered the game on the ensuing Mustang possession and quickly made up for the previous drive finding Zorhan Rideaux for a 53-yard touchdown and North Shore’s lead increased 27-3. North Shore had their foot on the gas and they weren’t letting up anytime soon.

With 2:13 left before the half, Evans struck once again, for a 23-yard touchdown run, his fourth of the night. At halftime, Evans already had 148 rushing yards on just 12 carries, scoring every three touches for a 34-3 North Shore lead.

Dorian Manuelopened the half with a 38-yard return for the Mustangs it became very clear North Shore wasn’t slowing down. Evans carried them back into the red zone, and Davis finished it off, finding Rideaux for a 13-yard touchdown. On their first possession of the half, Lake Travis started to click driving into the Mustangs red zone for just the second time all game. The scoring drought ended as Card found Wilson for a nine-yard touchdown to bring the Cavaliers within 31 points with five minutes left in the third quarter.

North Shore’s ensuing possession was delayed by the end of the quarter, but that would be the only thing stopping the Mustangs as John Gentrycarried it in to put North Shore up 48-10 with 11:14 left in the game.Cardwasn’t done fighting, but he couldn’t overcome the turnover hungry Mustang defense, who stripped him of the ball, giving the Mustangs the ball back in Cavalier territory.

For the first time, North Shore had to settle for a field goal inside Cavalier territory, and their margin widened, 51-10. Even when things seemed to be trending the Cavaliers’ way, the Mustangs were there to bring them down. With a chance to get one last score, Card fired, only to be picked off by Rayveon Shelton.

With that, North Shore clinched a state title appearance where they’ll face off against the winner of Duncanville/Allen on Sat. Dec 22. With a chance to finish undefeated, the Mustangs will lean on their elite backfield duo and stout defense to carry them to the state championship.

Al-Amir Ward and his Hutto Hippos on the rise