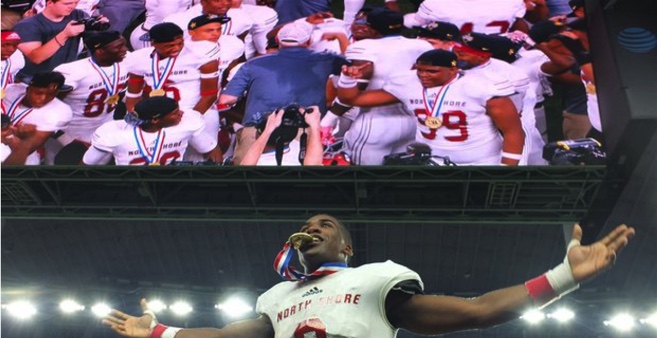 AT&T Stadium was built for spectacles. On Saturday night, Duncanville and North Shore delivered a game that will go down in Texas high school football history. From start to finish the game was thrilling even down to the final seconds.

It all came down to the final play. Down 36-35 with three seconds left on the clock, Dematrius Davis fired into the end zone and found Ajani Carter for a 45-yard touchdown to win the state championship.

North Shore’s had the upper hand for most of the game, and from the first plays of the game, the writing was on the wall.

North Shore opened on defense, but they still scored in the first ten seconds of the game. The Panthers attempted an end-around that Jordan Revelssnuffed out, forcing the fumble and returned by Ashton Reynoldsfor a Mustang score.

Duncanville was rattled and the game had just begun. Ja’Quinden Jackson aimed to calm their worries, leading the Panthers into North Shore territory on their second drive. The Panthers drive stalled, and they settled for a field goal for a 7-3 score with 8:18 left in the first quarter.

Up 7-3, the Mustangs offense was about to take the field for the first time against a defense that only let up 7 points per game on average. The Panthers’ defense lived up to the hype, holding North Shore to a quick three and out.

After a slow start, the Panthers were in prime position to take the lead. Jackson’s 59 yard rush put the Panthers into scoring position and Trysten Smith did the rest pounding it in from 19 yards out for Duncanville’s first lead of the game 10-7.

North Shore had rung the Panthers’ bell early, the Panthers rang back, how would North Shore respond? With Shadrach Banksof course. North Shore QB Dematrius Davishit Banks from 49 yards out, and the Panthers punched in the two point conversion for a 15- 10 score with 4:22 left in the first quarter.

The back and forth would continue, as Javon Fountain ran for 48 yards to bring the Panthers up to the Mustang 11. Three plays later, Smith punched it in to take a 17-15 lead with 29 seconds left in the quarter. As the quarter came to a close, the Mustangs had one more touchdown left in them. Banks sped off with a catch-and-run 77 yards past the Panther defense for to take a 22-17 lead.

Duncanville’s offense finally slowed down, punting it away to the Mustangs but they got the ball right back as the defense stripped the ball right out of John Gentry’s hands in a controversial call since forward progress was stopped. The Mustangs capitalized with a field goal to cut the deficit 22-20 midway through the second quarter.

Defensively, the Panthers were keying in on Evans which opened up Davis on option plays and allowed the passing game to open up. Davis exposed the defense, finding John Gentrywide open in the end zone for a 33-yard touchdown.

Duncanville’s offense was rolling once again, but their drive was cut short when Jackson fumbled on the Mustang 29 yard line.

Only three minutes separated the Mustangs and halftime. North Shore drove into Panther territory but an injury to Davis killed the drive forcing the Mustangs to settle for a field goal attempt. North Shore couldn’t increase their lead to 12 points, as the snap was fumbled and the time on the clock ran down.

Davis returned after the break but the Mustangs couldn’t establish a scoring drive, punting it early in the third quarter. Duncanville, down two scores came out with a vengeance, led by a rumbling Jackson who carried the Panthers into Mustang territory. After coming up short on third down, the Panthers settled for a field goal attempt, which was missed. North Shore’s lead remained at nine and they had the ball once again.

The Panthers defense was keying in after the break and for the second consecutive drive, the Mustangs were forced to punt. Duncanville converted this time, kicking a field goal to make it a one score game. Defensively, the Panthers were relentless forcing yet another punt on the ensuing Mustang drive.

Duncanville, needing one score to take the lead, took the opportunity and ran with it, literally, as Smith ran in his third touchdown of the night to give Duncanville their first lead of the game 30-29.

Something awoke in the North Shore offense, who hadn’t done much of anything in the second half. Davis was hitting through the air and on the ground pushing the Mustangs into Panther territory. North Shore retook the lead on a trick play, with Davis finding DE Jordan Revels for a touchdown put North Shore up 35-30 after a missed two-point conversion

With five minutes left in the game, the Panthers got the ball with a chance for a walk-off score. In the biggest moment of the game, Jackson came up with the score to put the Panthers ahead 36-35. North Shore had a minute left.

Driving down the field, the Mustangs were running out of time. With three seconds left in the game, it all came down to one play.

Lined up out of the Hail Mary formation, Davis fired and found Ajani Carter, who tappedhis toes and won the game in walk-off fashion for North Shore.