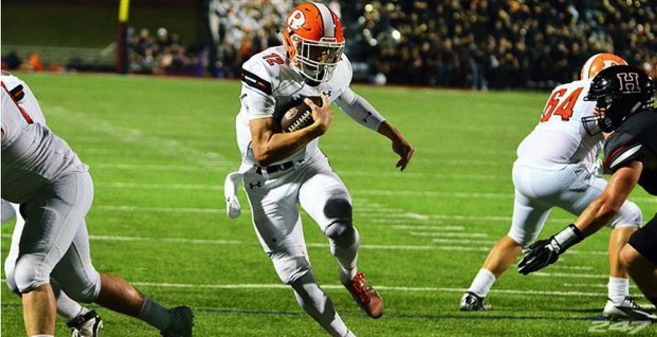 Rockwall QB Jacob Clark has faced his fair share of adversity on the gridiron in the last 12 months.

A move from Kansas high school football to Texas’ highest classification before his junior season is on that list of adversity. You could also throw in having to defeat the defending 6A state runner-ups in the first round of the playoffs… at their home stadium that they had not lost at in FIVE years.

When Clark has been dealt with pressure on the field, instead of bursting, he’s made diamonds. And with one season left in his already impressive career in Texas, all eyes are set on making a run in 2018.

Off the field, he has quickly turned into a highly touted recruit for power five schools around the country, but after a visit to Minnesota coach P.J. Fleck’s home base, Clark will set his eyes on being a Golden Gopher in 2019.

Through all of the transition and adversity, he has had his father Jason next to him. Since his elementary years, the dream of being a quarterback for the both of them has evolved into the player that Jacob is today. At every game, at every camp, and soon-to-be at every Clark family television come Saturday afternoons, you can find Jason Clark pacing and anxious for the best result for Jacob.

With one high school season left to go and a career in a rising Big Ten power ahead of him, Jacob has the world at the palm of his right hand.

Are There Really Any Benefits to 7-on-7?