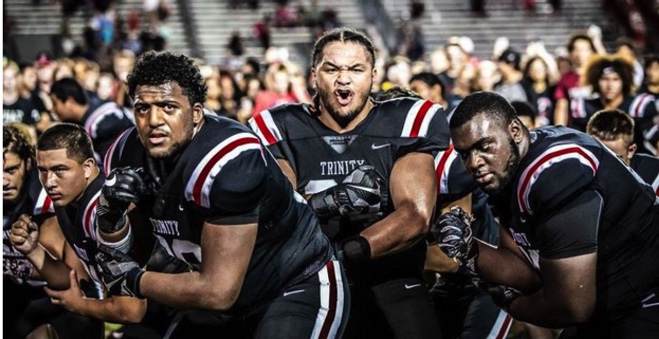 EULESS – Players dramatically taking fields ahead of kickoff, storming out of tunnels and bursting through signs. Teammates singing along to their alma mater when the clock hits zero, no matter what the scoreboard reads.

If you’ve been to a high school game, you’ve likely witnessed these traditions first-hand. But what you probably haven’t seen between the lines is a ceremonial Polynesian war dance.

At Trinity High School in Euless, Texas, Tongan culture is integral to the three-time state champion Trojans. One of the ways it manifests itself in the fabric of the program is performing the Sipi Tau war dance before and after each game.

“It is preparation for war, showing respect to our families and our team, and it makes us know we’re all as one,” senior linebacker Zion Fonua said. “No retreat and no surrender.”

No high school team’s celebration quite compares to Trinity’s traditional Sipi Tau. The purpose of the fierce synchronized chants is not only to electrify the Trojans and to intimidate opposing sidelines, but to celebrate the colorful history of a culturally rich school.

“Diversity plays a key role not only in the locker room but all over the campus of Trinity,” senior quarterback Laki Ellis said. “It makes us appreciate where we came from.”

Trinity’s passionate game time routines share the same roots of many of those on the team – the Tonga Islands. According to the Texas Tribune, Pacific Islanders make up 3.2% of the student population at Euless Trinity, a significant difference from the 0.1% average among Texas high schools. While Trinity’s proportion of Polynesian students may still seem insignificant, the Tongan influence within the locker room instills values in the Trojans on-and-off the field.

“The Tongan culture that has been inherited into Trinity Football helps us learn the true meaning of brotherhood and family,” Ellis said. “Following Tongan culture, we learn to respect and serve others. I feel like that has helped us become closer and humble ourselves.”

The Tongan population flocking to Euless, a seemingly random town in the Dallas-Fort Worth Metroplex, has become a phenomenon in Texas. The Polynesian community has produced men amongst boys on the field, as the Trojans still march into games equipped with hulking linemen. However, Euless wasn’t always the Tongan hot spot that it is today.

In fact, Trinity’s football program taking off may be thanks to air travel.

“For most of the players of Tongan descent, our parents and grandparents were coming here for the opportunity to find work and it just so happened that the airlines [at the newly opened Dallas-Fort Worth Airport] were hiring. So, Euless Trinity was right down the street.”

“Seeing how successful Trinity had been since Tongans arrived made parents want their kids to go to a school where Tongans made a name for themselves,” senior defensive tackle William Latu said. “We all fit in like a big happy family.”

Trojan athletes are no strangers to war dances such as the Sipi Tau. While the Trojans claimed three state titles in five years from 2005-2009, state powerhouse Trinity caught national attention thanks to the team’s prior ceremonial tradition, the Haka.

“It all started with the Haka,” Fonua said. “Growing up in Euless, coming to all the Trinity games, as little kids we all looked up to those players. When they would do the Haka we would copy the moves.”

As a new generation of Tongans passes through the doors of Trinity High School, the Polynesian culture continues to thrive in Euless. And according to Fonua, so does its traditions.

“Now as players, actually on the field doing our Sipi Tau, it means so much.”