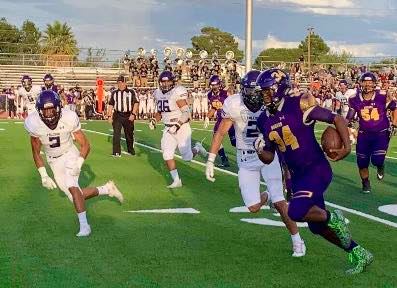 This game was a true battle of offense with the Burges Mustangs pulling away in the fourth quarter to take down the Eastlake Falcons.

The Mustangs took over and put together a nice drive capped off by Robert Hall 1 yard touchdown.

Next up was the Falcons turn to answer back with a little trickery as Daine Kirtley takes the 69-yard hook and ladder to the house.

Tie ball game at the end of the first quarter.

The second quarter was another back and forth affair.

However, the extra point would be no good.

Mustangs would lead the Falcons 20 to 7

The Falcons would manage to light up the scoreboard near the end of the half as Orion Olivas connected with Daine Kirtley for his second score of the night.

Olivas came out hot in the third quarter connecting with Matt Jones for a 13-yard touchdown.

Eastlake took the lead 21 – 20 at the end of the third quarter as Burges was unable to answer.

Burges would look to Robert Hall to carry the workload in the fourth quarter as he rumbles in a 17-yard touchdown.

Down by two, the Mustangs elected to go for the conversion and Tavorus Jones calls his own number.

This would pull the Mustangs ahead 28 to 21.

Olivas took command of the ensuing possession picking apart the Mustang secondary before finding Matt Jones in the back of the end zone from 25-yards out.

The Falcons would fail to convert on what looked to be a busted play and the Falcons trailed 28 – 27.

The Mustangs added some insurance as Hall would break away on a 16-yard touchdown scamper midway through the fourth quarter.

The Falcons look poised for a fourth-quarter comeback with Olivas at the helm.

Olivas drove the Falcons down the field into Mustang territory with under three minutes to play.

The Falcons would find themselves in a fourth-down situation that could decide the game.

Olivas scrambled and threw for the endzone, the ball would be juggle between two Falcon receivers before falling to the floor.

The Mustangs come out in Victory formation and take a knee to end the game.

The Burges Mustangs hold on to beat the Eastlake Falcons 35 – 27.

Although Olivas finished the night throwing 26 of 39 for 337 yards and 4 touchdowns it would prove to be too little to take down the Mustangs.

Burges was led by Tavorus Jones 8 carries for 53-yards 1 touchdown and 7 receptions for 94-yards, as well as Robert Halls, 79-yard 3 touchdown effort.

The Mustangs improve to 2 – 1 and take on Soccorro next week, the Falcons fall to 0 – 3 and take on EP Pebble Hills.

Allen vs Coppell Live Broadcast by The Old Coach

Allen vs Dallas Jesuit Live Broadcast by The Old Coach