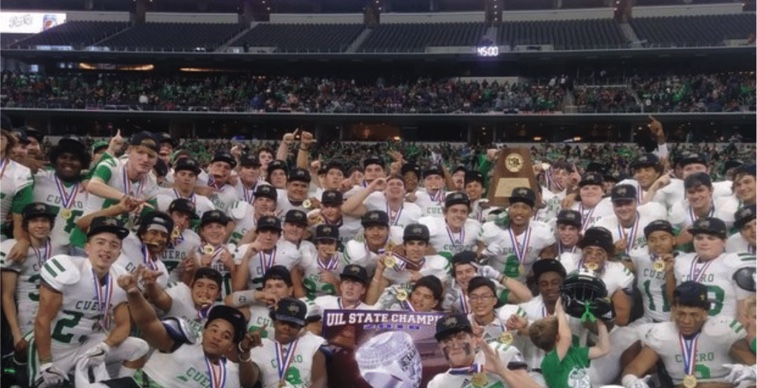 Cuero didn’t lead for two and a half quarters. Then Jordan Whittington happened. Led by the Texas signee, who ﬁnished with 314 rushing yards and six touchdowns on the day, Cuero defeated Pleasant Grove 40-28 to win the 4A-DII title.

The Hawks dominated the ﬁrst 21 minutes of the ﬁrst half, before Whittington took matters into his own hands. From there, Cuero relied on the Texas signee to carry them to the title.

Pleasant Grove opened with the ball, quickly establishing a run game and pounded their way to the Gobble 12 yard line. With 8:46 left in the ﬁrst quarter, Bruce Garrett punched it in from twelve yards out for a 7-0 lead. Cuero didn’t waste any time responding, as Whittington lined up in the wildcat formation and took it 69 yards to tie up the game on the ﬁrst Gobbler play from scrimmage.

Both defenses forced back to back punts before the Hawks found a rhythm. At the end of the quarter, Garrett did it again, punching it in from nine yards out to give the Hawks a seven-point after the ﬁrst twelve minutes. Cuero’s offense was stalling and had no answer initially. The Gobbler defense was gashed for a 69-yard touchdown by Garrett late in the half to put the Hawks up by 14. Things seemed to be spiraling out of control for Cuero.

Then, Jordan Whittington took over.

With just over three minutes before the half, the Texas signee turned on the jets for a 54-yard touchdown to put Cuero back within striking distance. After the defense came up with a huge stop, the Gobblers had the chance to tie the game up before the half. With just two seconds left on the clock, Michael Barta turned to Whittington, who broke the defensive coverage to haul in his third touchdown of the game.

At halftime, Pleasant Grove’s lead had been cut down to just one point.

Cuero opened the half with the ball and turned to the ground in an attempt to run down the clock. The Gobblers took 8:20 off the clock but came up short, turning it over on downs. Pleasant Grove’s offense was still reeling from the end of the ﬁrst half, punting it back to the Gobblers. This time, the Gobblers did not miss.

The Hawks were shell-shocked and needed to make a statement. Facing fourth and short in their own territory, Pleasant Grove attempted to pull momentum back their way on a quick pitch to get the ﬁrst down. However, the Gobblers came up with a huge stop and had a chance to put the ﬁnisher on the game.

Whittington, who’d done it all, did it again, this time from twelve yards out to put, what seemed to be the ﬁnisher, on Pleasant Grove, 33-21.

The Hawks weren’t out just yet. With just under six minutes left in the game Garrett threw it to Harmon on a trick play to bring the Hawks down to the Cuero half-yard line. One play later, the Hawks were back in it, down just 33-28, following a one-yard rush by Harmon.

The ensuing onside kick fell just out of the Hawks’ hands and Cuero had the ball with under four minutes left. As he’d done all game, Whittington avenged the third overturned touchdown, with his sixth touchdown, this one from 20 yards out, to put the Gobblers up 40-28 with 2:54 left in the game. The touchdown put the cap on the

Hawks’ chances, who needed two touchdowns in three minutes. Caleb Brown ended any hope of a last second comeback, with an interception to seal the victory for the Gobblers, their ﬁrst state title since 1987.