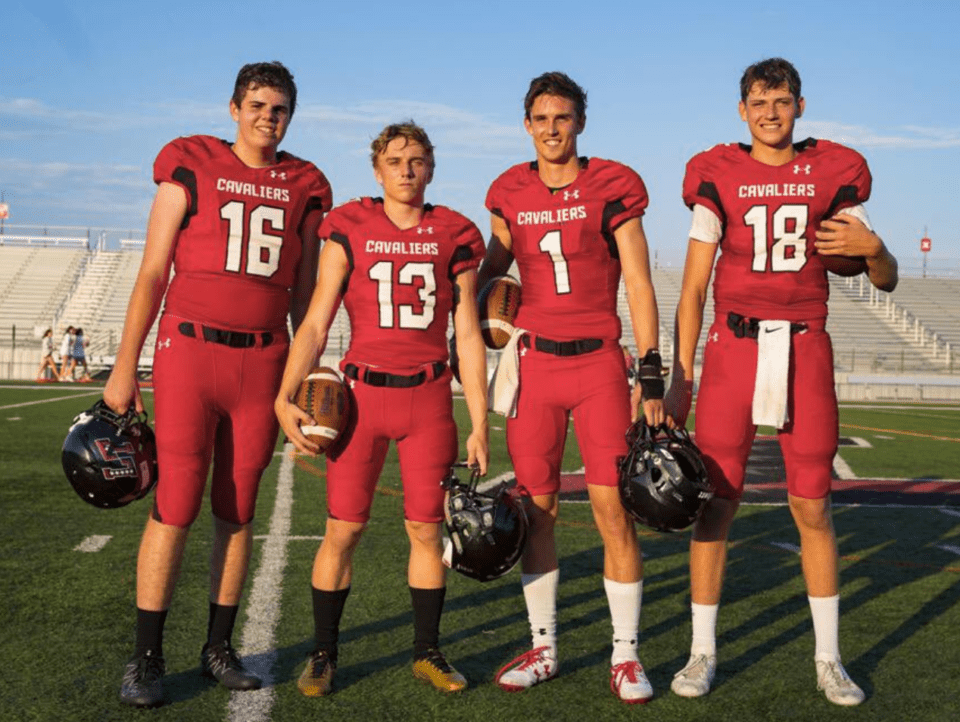 The Austin based High School is a goldmine for championships as well as developing quarterback talent. Garret Gilbert was the Gatorade Male Athlete of the year in 2008. A year before, Cavalier alumni Todd Reesing led Kansas to a 12-1 record. Recently, Baker Mayfield went from Lake Travis to a Heisman trophy, to becoming the number one pick in the draft.

Hudson Card, early on committed to the University of Texas. He then led Lake Travis in 2018 to a 13-2 season, a state semifinals appearance, and had 59 total touchdowns. Card started off his 2019 campaign hot going 6-1 including coming back to defeat rival and eventual state champion in 6A D2 Westlake.

In that contest Card threw for 211 yards and three touchdowns. He also injured his foot which required surgery. Most people thought Card played his final High School game.

Card would eventually come back in the state quarterfinals against Judson and lead them to the state semifinals. The man that kept the powerhouse afloat though? Nate Yarnell.

Nate Yarnell, the junior backup for Lake Travis, went 6-0 in his starts after Card’s injury. This included three playoff games to put the Cavaliers in position to make a run at a state title.

“Getting to come in and play was amazing. Once we got over the shock of Hud being hurt, the team rallied and supported me and I was glad I was ready when my number was called,” Yarnell said. “Every second of those 6 games was so much fun to battle with my teammates.”

Yarnell in his six starts put up an impressive stat line of 1,248 yards with 11 touchdowns whilst completing 67% of his passes. He added three more passing touchdowns in relief appearances as well.

“Our coaches are the key to our success,” Yarnell said. “We have the best coaches in the state and they push us to reach our full potential every day.”

Lake Travis has won six state championships, all of which have come in the past 13 years. They became the first program to win five consecutive championships (4A and above.)

“We have a culture of winning and we expect everyone to give their all for the team so we all succeed,” Yarnell said.

The Cavaliers have made it to at least the state semifinals for five consecutive seasons including one state title.

Yarnell, in his senior season, looks to make it a sixth straight season. The 6’6” pro-style quarterback already holds three offers from Houston, Tulsa, and UAB.

Last season he got a chance to shine, now 2020 is his year for the taking.

“I learned how to be a great teammate. Hudson always led by example and did the right thing and showed me how to be the best leader I could be to those around me,” Yarnell said on what he learned from Hudson Card.

Lake Travis has long been known as a state powerhouse. Nate Yarnell looks to keep that mantra going as he will take the reigns from Hudson Card in 2020. He does so, now with six full starts under his belt.

Yarnell is enthusiastic about the 2020 season as he hopes to get the Cavaliers back to the mountaintop.

“The goal is always a state championship. That’s the goal for our whole team and what we work towards all year.”