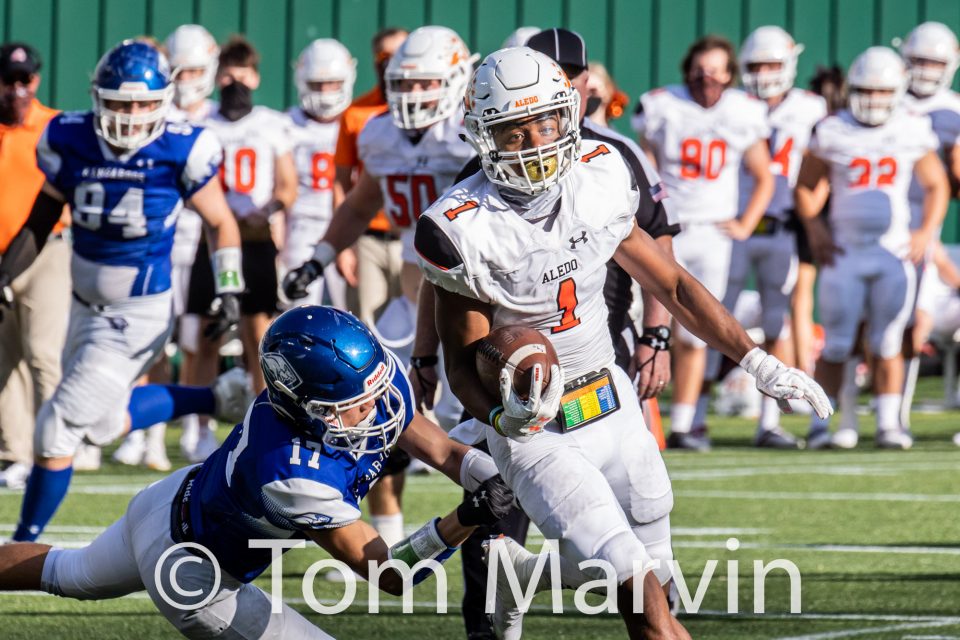 The big question around the Aledo football team before the start of the season was where would the offense come from?

The answer, after game one, is everywhere.

Sophomore quarterback Brant Hayden threw for 271 yards, completing on 10 of 16 for three touchdowns as the Bearcats opened the season with a 70-7 win over Weatherford on Saturday at Globe Life Park.

JoJo Earle had two TD runs out of the Wildcat formation and a TD reception. Senior receiver Logan Flinta had a pair of long TD receptions. Aledo got TD runs from three different running backs and the defense came up with a pair of scores. Backup quarterback Gael Castro also had a long TD pass.

It took Aledo just nine offensive plays to jump out to a 14-0 lead before Weatherford managed to get a first down.

Hayden opened Aledo’s first possession by hitting Earl for a 13 yard gain, then had an 11-yard toss to Dylan Martin to move the ball to the Weatherford 31. From there, Earle lined up in the Wildcat formation and ran right, before a quick cutback allowed him to outrun the defense for the touchdown to give Aledo the early 7-0 lead with 8:40 left in the first quarter.

On Aledo’s second possession, the Bearcats faced a second-and-25 when Hayden threw a 23-yard pass to Earle, then completed the drive with a 34-yard strike to Flinta. Aledo was up 14-0 and the sophomore quarterback had completed his first four passes for 81 yards.

Flinta was several yards behind the defense on both of his TD receptions, and Earle admitted that Flinta would probably beat him in a race. Trying to plan coverage for both Earle and Flinta may give opposing defensive coordinator’s some sleepless nights.

Aledo led 21-0 when Hayden hit Earle on a screen that went for a 73-yard touchdown.

Weatherford got its only score when an Aledo offside penalty helped them convert a fourth down, then Cisco Caston made a 1-handed catch on a throw behind him to cut Aledo’s lead to 21-7 with 5:01 left in the half. Aledo answered with a 72-yard TD drive that was capped by a 1-yard TD run by Earle out of the Wildcat formation to make it 28-7 with 3:00 left in the first half.

The defense got Aledo’s next score when Elijah Valencia returned a fumble 25 yards for a TD with just 36 seconds left in the first half. To make it 35-7.

Aledo’s other defensive score came on a pick six from freshman cornerback Jaden Allen, who had a Division I scholarship offer before he even played a game in high school.

The Bearcats home opener is Friday against Frisco Lone Star.