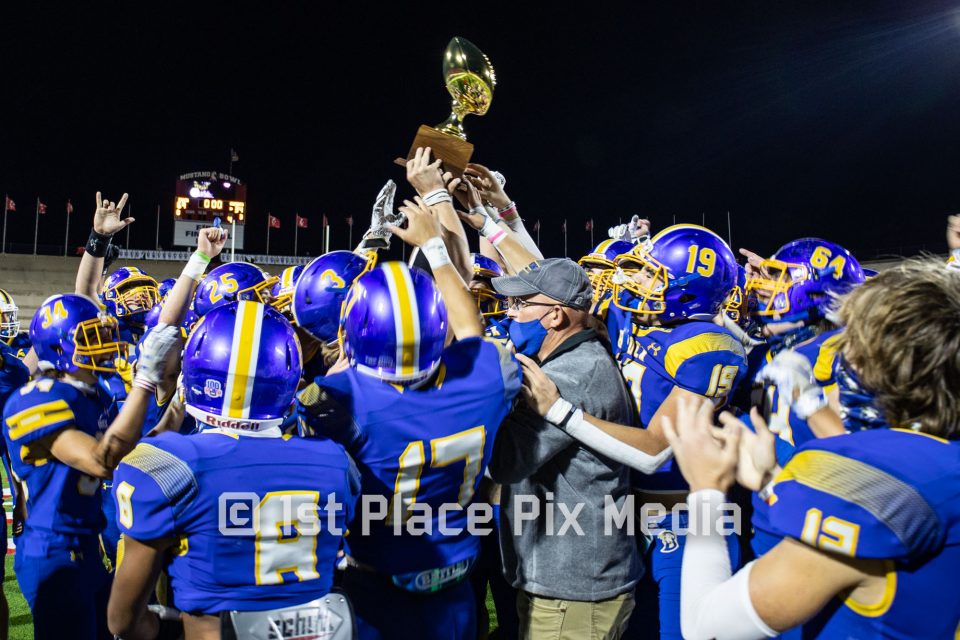 The Brock Eagles used special teams turnovers and a balanced offense to get off to a quick start in Thursday’s 69-34 victory 3A Division I area round playoff victory over Denver City.

Brock scored on its first eight possessions to roll to a 55-0 lead midway through the third quarter. The eighth TD was scored by the Brock reserves, who took over at the start of the second half.

The Eagles recovered a Mustang fumble on the opening kickoff to set up the game’s first score.

Brock got the ball back at the Mustang 41 to start their second drive when the defense stopped Denver City on downs. Quarterback Jaxon Gleaton capped the second scoring drive with a 1-yard run.

Denver City ran three plays and lost yards on each play as the Mustangs were forced to punt into the wind from the own 14. Brock started their third possession at the Mustang 38. It just 4 plays for the Eagles to open the lead to 21-0 when Gleaton tossed a 26-yard touchdown to Kutter Wilson.

The Eagles then recovered a fumbled kick when Eli Potts nabbed the lose ball at the Mustang 28.

This time it took three plays for Brock to stretch the lead to 28-0. Gleaton threw his second TD pass, this time an 11-yarder to tight end Nathan Jones.

“Our kids were ready to play,” Brock coach Chad Worrell said. “Obviously the turnovers in the first half helped. Our kids took advantage of those. You can get turnovers, but you have to take advantage of them.”

Denver City then moved the ball to the Brock 29 before turning the ball over on downs at the Brock 30. On their fifth possession, the Eagles finally had to run an offensive play from their own end of the field. However, the longer distance to pay dirt did not slow down the Eagles. Cash Jones carried the ball four times for 62 yards on the scoring drive. His 35-yard TD run down the right sideline capped the drive to make it 35-0 with 5:39 left in the half.

Denver City then turned the ball over on downs at their own 39 with 4:30 left in the half.

Cash Jones ripped off a 30-yard run to start the drive, and Kutter Wilson ended the drive with a 7-yard TD run to make it 42-0 with 2:14 left in the half.

The Eagles weren’t done yet. They got the ball back at their own18 with 1:07 left in the half. On first down, Gleaton hit Palfreeman on a 74-yard pass that took the ball all the way to the Mustang 8. Myles Semas scored on the next play to make it 49-0 with 27 seconds left in the half.

Cash Jones finished the game with 11 carries for 123 yards and one TD while quarterback Gleason completed 3-6 for 111 yards and two touchdowns. The stats for the starters are only for the first half, since Brock reserves played the entire second half.

The Brock offense ran 36 plays in the first half and scored 49 points.

Brock coach Chad Worrell said they decided at half to send in the reserves at the start of the second half.

The second-team offense used up half of the third quarter with a 71-yard scoring drive against the Denver City first string. In fact, Denver City kept its starters in until the end of the game. Jake Lindberg capped the scoring drive with a 7-yard run as Brock opened up the lead to 55-0.