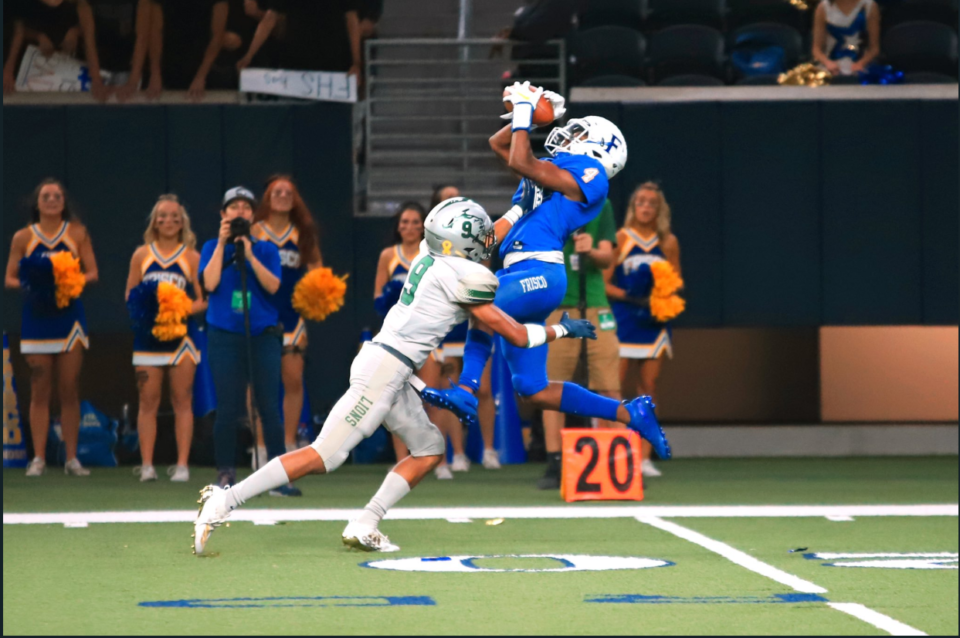 Frisco, Texas is widely known as one of the best places in America to live. It’s also one of the fastest-growing cities in America. Its population has had almost a 61% increase since the 2010 census.

Due to the vast amount of people moving to Frisco its caused concern for more and more high schools in the city. There are 10 high schools within Frisco ISD and its home to some of the best football that the state of Texas has to offer.

Frisco Reedy last season took a perfect regular season deep into the playoffs and gave eventual state champion, Aledo, its biggest test of the season. Frisco Lone Star in 2019 is 9-0, one of the best teams in the state and even gave powerhouse Highland Park only it’s second-ever home loss under legendary coach Randy Allen. One of the more surprisingly dominant teams of the year, however, is the 8-1 Frisco Raccoons.

Just two seasons ago Frisco hit absolute rock bottom, the 2017 squad went into the history books with a putrid 0-10 winless season. Those Raccoons only scored on average 15 points a game while losing by two touchdowns every Friday night.

Just two seasons later and the 2019 Raccoons are 8-1 and with a chance to win the 5A-2 District 7 title with a victory over Lovejoy, a title they haven’t had this decade.

No matter the result of week 11’s contest against Lovejoy however, Frisco has already clinched a playoff berth. A feat in which they’ve only accomplished nine times in the past 16 seasons.

The 2019 Raccoons, however, are looking to make their mark on their schools’ history. This year’s squad is averaging an impressive 40.5 points per game, their highest of the decade. The defense is holding up their end as well only letting up a hair more than 20 points a game. On average Frisco is doubling their opponents’ point total.

Junior Quarterback Caree Green has 15 touchdowns to just three interceptions on the year. Senior running back Bryson Clemons has been phenomenal rushing the ball for 1,045 yards on over seven and a half yards a carry and 16 total touchdowns.

One of the most potent offensive weapons that the Raccoons possess however is a junior wide receiver, Chase Lowery.

Lowery only has 28 catches on this season. He makes each and every single catch count though as his 28 catches have gone for 655 yards and seven touchdowns.

47% of Green’s completions have gone to Lowery this season. Lowery averages over 23 yards a catch with 25% of his catches going to the endzone.

Lowery was inspired to start playing football by his father.

“Well to start off with I would probably say my dad was the one who inspired me to play football, he just introduced it to me at a young age and ever since then just I loved it.”

Lowery when asked about the key to his success this season said the following.

“Well first I like to thank my coaches for having trust in me but the big reason is my QB Caree Green. You have to have that mindset that when the ball is thrown in the air that it’s yours and no one else’s.”

Lowery lives by that motto, and you can see it in his play. Lowery has come up clutch time and time again for the Racoons this season.=

September 27th at the Star against in-town rival Frisco Reedy, Lowery put on a show. He reeled in nine passes for 154 yards a touchdown. Most importantly though, with the Raccoons facing a three-point deficit in the final minutes, Lowery caught a 30-yard bomb from Green ultimately setting up the game-winning touchdown.

Every time you look up, it seems as if Lowery is putting up one highlight play after another.

Lowery shines when the stage is biggest. Earlier in the year against now 7-2 Denton Braswell, Lowery in a game he later dedicated to his grandfather, exploded for six catches that totaled 199 yards and three touchdowns.

With a win against Lovejoy in the season finale, Frisco would move to 9-1 and win the district title. Impressive, but Lowery has his sight set on a bigger prize.

“Winning district would be a big accomplishment for the season, but our main goal is to get to state.”

Lowery does it all for Frisco high school, literally, he even plays defensive back where he’s totaled 35 tackles, and one interception on five passes defended.

The Raccoons are a well-oiled machine and if they hope to make a run at their first-ever state championship, Lowery will be a big reason why they do.

“For Frisco High School are endgame is State. We feel like we have the athletes to get there, and to not just get there but win.”

Lowery, who has offers from universities such as North Texas and Iowa State is destined for a bright future wherever he ends up.

“I can tell you one thing it’s finna be a show.”