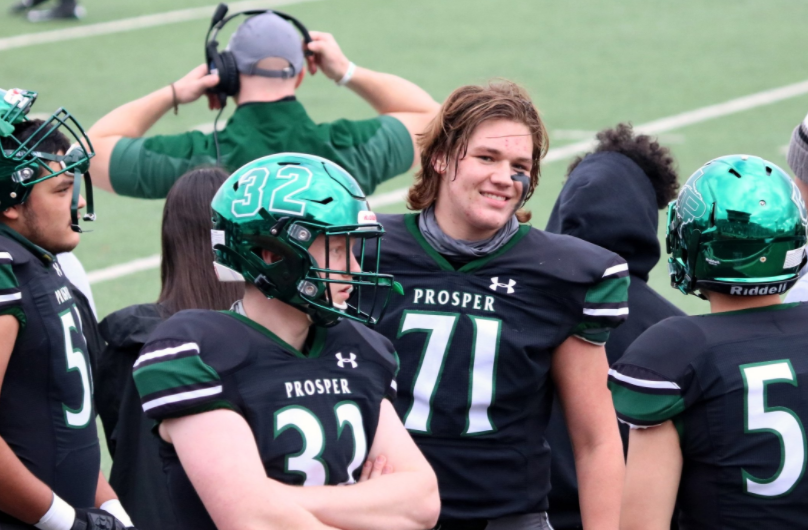 If you’re looking for an under the radar team to root for these playoffs, look no further than the Prosper Eagles. Since the inception of their brand new stadium, Children’s Health Stadium, they’ve quietly been one of the more impressive teams in the DFW area.

The Prosper Eagles hold an 18-6 record since their new stadium opened. Last season, the Eagles entered the playoffs at an 8-2 record. Losses to Allen and Dallas Jesuit were the only blemishes on their record. Once in the playoffs though, they became a different animal entirely. They rattled off victories against Wylie, Mesquite, and The Woodlands to reach the 6A D1 state quarterfinals. Prosper outscored those three opponents 107-32.

They then ran into Braedyn Locke, Jaxon Smith-Njigba, and Rockwall. While Prosper did put up a valiant effort, ultimately, they fell short 59-42 thus concluding their season.

While Prosper in 2020 had to say goodbye to star wide receiver Hayden Metcalf, along with Texas commit Jake Majors, they were still returning quarterback Jackson Berry,  wide receivers Tyler Bailey, Cameron Harpole, and linebacker Aidan Siano among other talents.

Prosper in 2020 also had to say hello to a brand new district. Prosper alongside Allen, Braswell, Guyer, Little Elm, Mckinney, and Mckinney Boyd were all fighting for four playoff spots. Five of those seven made the post-season in 2019.

Despite COVID-19 robbing the Eagles of two of their games, Prosper still managed to fight to a 5-3 record and thus a spot in the 6A D2 playoffs.

A big reason the Eagles were able to fight and compete this year and still find success is due to the culture of the football team.

“The culture of Prosper Football is ‘DYJ- Do Your Job.’ This has been our slogan for a while now,” sophomore tackle Colin Beesley said. “Doing your job is as simple as it sounds. We do our job on the field, off the field, in our personal lives, and in the classroom.”

Beesley is one of the new starters for the Eagles and he has found immense success immediately. As just a sophomore, he stands at 6’5 245-pounds and is the team’s starting right tackle.

“Starting as just a sophomore is a challenge and a blessing at the same time. Being the youngest on the team definitely holds its challenges in and of itself, but it holds a blessing knowing that I have two more years of varsity football ahead of me, and it allows me to build better relationships with not only the players but the coaches too,” Beesley said.

Even though they entered the playoffs at 5-3, Prosper is better than what their record states. Two of their losses this season come against Allen and Guyer, two of the best teams in the stats of Texas hands down. Prosper lost those games by a combined score of 54-59. Despite playing as good as they possibly could’ve in each game, they lost on game-winning touchdowns by the other team on both occasions.

Outside of a hiccup against Braswell, Prosper has been electrifying this year. They hold victories against Boyd, Little Elm, Mckinney, Prestonwood Christian, and Trinity.

“Some things that have led to our success is unlocking our potential. At the beginning of the season, we really didn’t know how much potential we had to bring to the table, until our first couple of games where we saw we could be really good when we wanted to be. Instead of playing not to lose, we started playing to win and that is the major part of us being successful this year,” Beesley said.

Prosper entered the playoffs with a tough first-round matchup against the undefeated Flower Mound Marcus and LSU commit Garrett Nussmeier at quarterback. The four-star commit threw for 2,815 yards with 33 touchdowns to just five interceptions whilst completing 71% of his passes on the year. However, an injury in the final game of the season made him unavailable against the Eagles.

Prosper knocked off the Marauders 38-19. That set them up with a date against Arlington Bowie in round two. A tough matchup on paper, that started off close. Bowie on their first drive marched down the field to go up 7-0. From that moment on, Prosper outscored Bowie 28-0. That opening-drive touchdown was the only time Bowie put points on the scoreboard all day.

Prosper finds themselves back in the sweet sixteen, this time against V.R. Eaton who sit at 9-3. Braden St. Ama leads the charge as the dual-threat quarterback has thrown for 1,666 yards with 19 touchdowns as well as ran for 936 yards and six more touchdowns on the ground.

Beesley and Prosper are confident however that they can not only beat V.R. Eaton but run the table entirely.

“This is the team that definitely can bring home the state title,” Beesley said. When we play to win we are such a great team with amazing talent and when we all come together and play to our true potential, we can definitely bring that state title back home to Prosper.”

These Eagles are a different predator than they were at the beginning of the season. Before they were hunting for fish in the river, now they’re full-on intimidating causing death from the sky.

Even if they can’t get it done this year, watch out for Beesley in the future. The young tackle already has tremendous talent and is only looking up. He fills a void left by four-star commit Jake Majors swimmingly. Beesley soon enough will be the most talked-about lineman in the area, just wait and see.

Some things people should know about me is I work the hardest I can no matter what. Over the summer I was working super hard to gain that varsity spot as a sophomore offensive lineman and I dealt with the adversity of being injured with knee issues at the time. I continued to grind wanting that spot on varsity and I got what I worked for. I’m definitely someone to look out for here in the future with my size and athletic ability with my size,” Beesley said.

Beesley fighting for the varsity spot perfectly encapsulates what these Eagles are all about, DYJ – Do Your Job.

Prosper will take on Eaton on Saturday, December 26th at Globe Life Park at 11 A.M.

Marcus to play the Coppell Cowboys