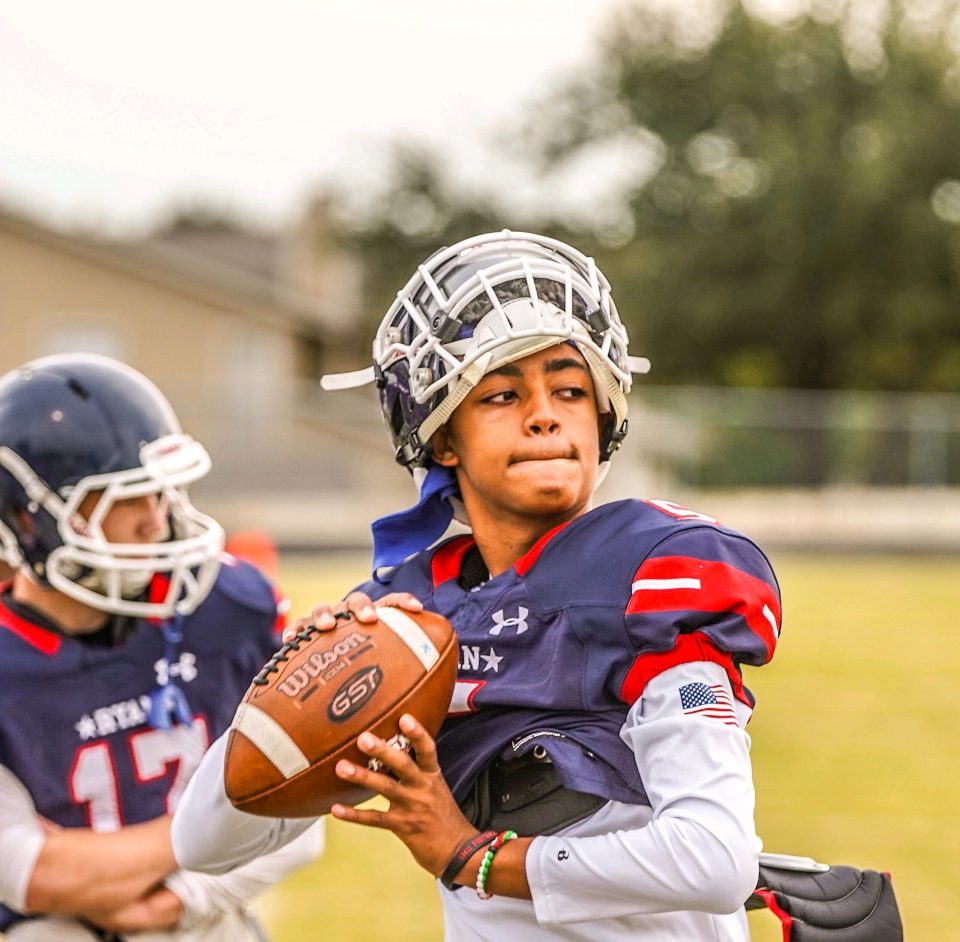 Denton Ryan is the early favorite to win it all in 5A D1 this year. This past year they made it to the state title game where they were a hail mary short of winning it all. Their opponent in that game, Shadow Creek got bumped up to 6A so they’re out of the way.

Ryan on the other hand, returns five-star athlete Ja’Tavion Sanders, near five-star athlete Billy Bowman Jr. four-star cornerback Austin Jordan and quarterback Seth Henigan among others. The Raiders from top to bottom is absolutely stacked.

Ryan is not just looking good for 2020, but well beyond that too. Their freshman team finished 2019 with a perfect 10-0 record. The star of the show? Ryan’s quarterback, Khalon Davis.

Davis is a 2023 quarterback and one of the best up and coming signal-callers in the state. He finished his freshman season with 25 total touchdowns and just three interceptions.

“Well, my Work Ethic. I train three to four days a week,” Davis said. One day with my quarterback coach Mclane Carter. Two days with my teammates, and one day with my dad.

I bring wide receivers and linemen to train with me to make the game more realistic and I study film.”

Denton Ryan has been a dominant force in the world of Texas high school football. A fixture every single year deep in the playoffs. They hold two state titles to their name (2001,2002) and haven’t lost a single regular-season game since 2014. The culture of Denton Ryan is just different.

With a team like Ryan, anything less than a state title would be a disappointment. Davis echoed that.

“Winning State. I’ve only been here one year but I’ve learned that’s the goal,” Davis said.

To stay in shape during the off-season, Davis also runs track for the Ryan Raiders. He competed in the 400-meters as well as relays.

“It helps me stay in shape and It allows me to continue to compete,” Davis said.

There’s no denying that is Denton Ryan’s year. It would be beyond shocking if Ryan wasn’t back in the 5A D1 state title game. Regardless of what happens though, the future is glaringly bright.

Ryan has some of the best young talents in the nation. Austin Jordan is a four-star cornerback for the 2022 class who already has offers lined up from Ohio State, Oklahoma, Texas, and Auburn among others.

Khalon Davis and the 10-0 freshman squad are coming in, and after this year they’re ready to take over.

Khalon Davis is a name you will be hearing for a long long time. There’s just no denying it.

When asked what fans should know about him, Davis said “Well… I’m going to show them in 2020.”