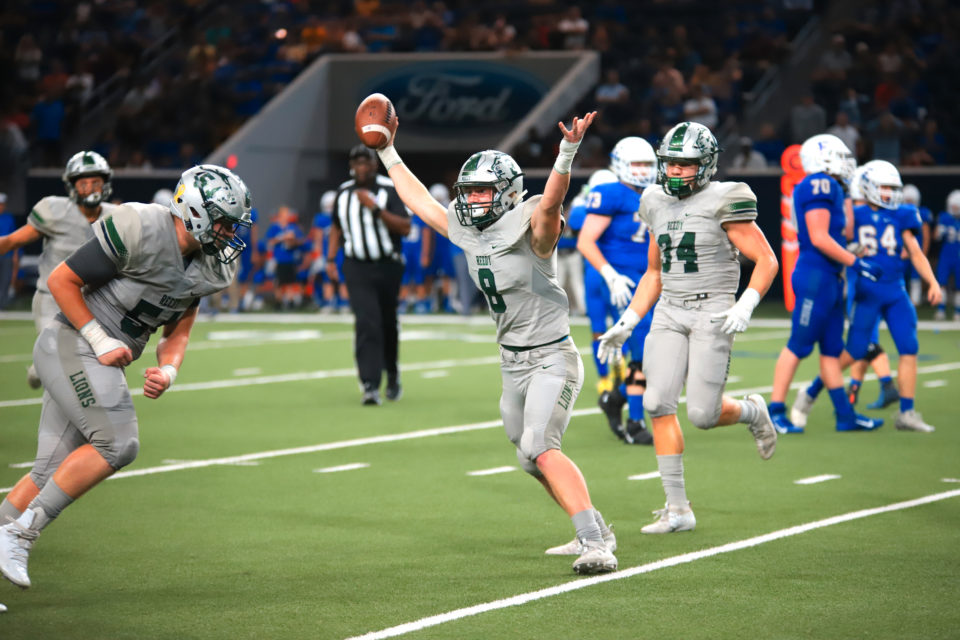 It’s been a rough first half of the season for the roaring lions of Reedy High.

Last year’s squad managed to win a district title in only it’s third season as a program, go 13-1, and manage to be the biggest threat to eventual state champions, Aledo.

This time around through five games they’ve already lost more than all of last season going 4-2 to start the year.

Going into the season, however, these lions had enormous shoes to fill. They lost a plethora of senior starters.

The 2017 and 2018 Reedy lions were a tight-knit, experienced group who through the years had built chemistry in order to put it all together and make a deep run in the playoffs.

The fact that this year’s Lions team is 4-2, is not an indictment. In fact, it’s pretty darn impressive.

A sign that you’re dealing with a good team is when they can win ugly. When everything falls apart and the plan isn’t going accordingly, they can still find a way to win. That motto embodies the Reedy lions this year.

They won their first game, 17-7 against Plano West in a defensive dogfight. The 27-21 victory over Lake Dallas was not nearly as close as the final box score makes it seem. The main reason however on why people can’t write off this Lions squad though is their two losses.

The Lions losses against The Colony, and Frisco respectively paint a much clearer picture of this team than any of their wins do.

One of the new stars on the defensive front is Junior lineman Jack Jamison. Jamison has had a nice start to his season with 23 tackles, four for a loss, to go with a sack and a blocked punt.

When asked about the teams 48-19 loss at The Colony Jamison said “The Colony game was tough. We walked off the bus too cocky and we got beat. It sucked, so we put our heads down and got to work. Practice hasn’t been the same since the loss to The Colony. We are all serious at practice and there is no messing around because we never want to get embarrassed like that again.”

This quote perfectly embodies the 2019 Reedy Lions. They saw all the success last season and these new starters thought it would be more of the same. They walked into The Colony thinking a win was inevitable but instead Thanos snapped his fingers and it was turned to dust.

The Lions took a long bus ride home and got back to work. Taking a loss like that early in the season, especially in a non-district game, can help a young team rally back together.

One of the reasons for the Reedy Lions’ fast start as a program is the incredible coaching staff led by head coach Chad Cole.

The Lions came back from that loss and immediately had to play in the biggest stage in all of north DFW, The Star. This coaching staff got the Lions focused and back on track and since that embarrassing loss has rallied off two straight wins against Lake Dallas and on the road against a fast-paced Denison team.

September 27th, at the Star, was a true sign of just how good this Reedy team has become.

Just taking the stats and box score into account it looks like Reedy lost a game to in-city rivals Frisco High 35-31.

While digging more though you can see that at one point Reedy was down 22-0 and entered the half down 28-7. All signs were pointing to the Reedy Lions being embarrassed again, this time at The Star.

Most young teams would walk into the locker room at halftime with there heads’ draping low and eyes locked on the floor. These kids, however, are morphing and evolving into a different animal.

Reedy came out with a vengeance in the second half and a blazing fire in their eyes. The defense tightened up, the Frisco offense that was moving the ball at will in the first quarter couldn’t do anything a few hours later.

The offense through Junior quarterback Jalen Kitna and star athlete Will Harbour put enough points back on the board to actually tie the game. 21 straight points out of nowhere for the Lions.

Halfway through the fourth quarter, with Frisco High driving down the field the Lions got even more help from their defense. Pressure from junior linemen Jack Jamison and Hudson Halbert led to a Michael Swope interception and a chance for the lead.

They capitalized and went up three points with under five minutes to go. The defense once again was doing its job until a heave by quarterback Caree Green to star wide receiver Chase Lowery with under a minute to go put the Raccoons well within a position to win the game.

That’s how football is most the times, it can come down to one single play.

Even in the eventual 35-31 loss this Reedy team showed guts, heart, and determination to come back and due just enough to almost win the game.

The defense is young made mostly of juniors, when asked about its identity Jamison said: “The identity of our defense is family, we are a tight-knit group and we play for each other.”

That was made apparent by the second-half performance by the Lions defense.

Even with multiple losses, the goal remains the same “The expectation for this year is to be district champs and compete for a state championship.” says Jamison.

This team is young, lethal, and now knows how to play and come back together. They’ve been through the wringer in the first half of the season, a slate of games that is much harder than their second half of games.

Expect to Reedy to get better and better with every game. Just like the Reedy of old, building chemistry and growing tighter with every snap until they return to their dominant play from last year.

By the end of this season, these Lions will be full-grown, ready to strike on any team that dares enter the field with them.

Next on the Lions schedule is a 3-2 Lovejoy squad on Thursday night October 10th at home.

Getting Hot Alluring Women On line