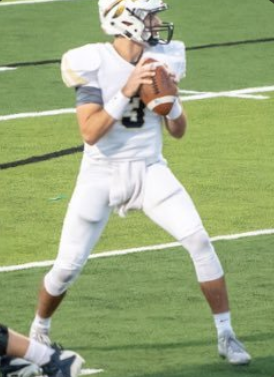 “The coaching staff, they started talking to me earlier on in the year, and right off the bat, we had a good connection. So with that, I knew that it would be a great place to develop as a quarterback and play ball,” Anderson said. “I also like the coaches as people, I know that I’m going into a place where I’ll have lasting relationships with the men that are going to be coaching me. The environment that I’m going to be going to is also big to me, being able to go to a school that also shares my same core values is a great opportunity for my athletics, academics, and faith. Both of my parents went to ACU, so I had some insight on what campus was going to be like, and that helped me to make the decision to commit!”

Anderson is a 6’1 near 200-pound pro-style quarterback who was a first-team all-district selection last year. He had offers from Abilene Christian, Arkansas-Monticello, and Lamar.

As the starting quarterback for Keller, Anderson led them to a 7-4 record including a berth in the 6A D1 playoffs.

“Preparation, that’s the big thing that allows me to be successful on Friday nights or in the classroom. Whether it’s studying for tests or watching tape in the film room what allows me and the team to be successful in making sure our minds and bodies are prepared,” Anderson said on what leads to his success.

Keller last year made it to the bi-district round where they fell to Flower Mound by a single point. Keller in 2020 only have seven starters returning, five on offense and two on defense.

In a district with clear favorite Southlake Carrol, Keller needs all the firepower they can get. Anderson looks to be that spark for them again come 2020.

“With all the craziness going on right now we only have one mindset, to play and to play as long as we can. Getting to the playoffs for the fourth year in a row, then getting the gold ball and going on some more,” he said.

Anderson looks to carry on the legacy that both his parents started at Abilene Christian in the future. For now, though, he’s focused on getting it done for Keller.

With him at the helm, I like my chances.

“To my Keller family and the future Wildcat family, just know I love to compete, and I love to win. So get ready we’re coming.”