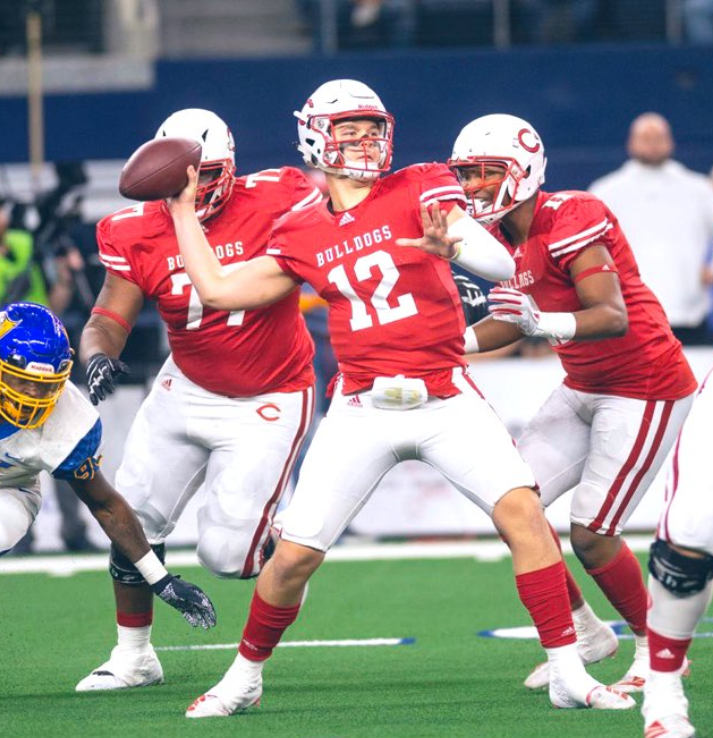 Carthage had a dream season last year en route to their seventh state championship, all since 2008.

Carthage went 16-0, scored over 40.7 points per game, and was only in one one-possession game all season. To do that, you need consistent, elite quarterback play at all times. Queue Kai Horton.

“It’s a blessing that I look back at all the time, working every day to relive the excitement and energy the state game held,” Horton said on winning the state title.

Horton is a 6’4 215-pound three-star quarterback via 247Sports. With a ranking of 86 Horton is the 25th ranked pro-style quarterback for the 2021 class. In the state of Texas overall, he ranks number 122.

As a junior, Horton went 16-0 with 49 touchdowns and 3,746 yards passing. He was named to the first-team all-district and second-team all-state for his efforts.

“My success is from my work ethic, I love to compete and hate losing in anything! It pushes me to be the best I can be and taking in the coaching from the great coaches I have around me!” Horton emphatically said.

Horton and Carthage in 2020 can’t defend their 2019 crown in 4A D1 because they move to 4A D2. Their biggest competition to go back-to-back? Texarkana Pleasant Grove and that elite defensive unit.

“We are filling some big shoes on the defensive side but some young guys are stepping in and looking better than ever,” Horton said on the steps they need to take to repeat. “We have to stay locked in and focused on every game and can’t look past till the state game.

Carthage is expected to return six starters on offense, but only two on defense.

While their defense is young, Horton looks to keep the offense rolling as they remain to be a favorite to win it all in 4A D2.

Horton unfortunately, hasn’t got much love recruiting wise. As of now, he holds offers from McNeese State and Stephen F. Austin but that’s it. Others are showing interest though.

“It’s been exciting, this pandemic has kinda messed up our spring recruiting but it hasn’t stopped me from working out and throwing all the time. I’m going to wait until after my senior season to finally make a decision because I want to make sure I’m making the right one with not being able to visit right now because of COVID-19,”

Carthage is going to yet again be a force to be reckoned with in 4A. With Kai Horton at the helm, expect Carthage to be in control of any game.

“That I love all the fan interactions and little kids who look up to me!” Horton said on what fans should know about him.