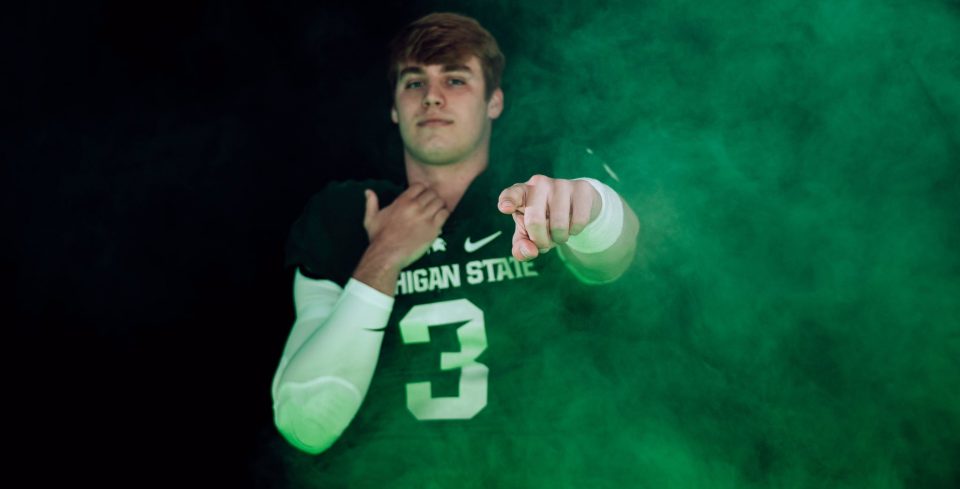 Fort Worth All Saints in its first three-game went 3-0 while averaging over 40 points per game. In their final seven games, they went 2-5, losing in the first round of the playoffs and only averaging a hair above 22 points a game. All Saints even beat the eventual TAPPS Division 1 state champions Parish Episcopal thus handing them their only loss of the season. The main difference between All Saints 3-0 start and their 2-5 finish, Hampton Fay.

Fay has it all, size, speed, athleticism, big arm you name it he has it. The 6’5 210-pound three-star quarterback only played three games for All Saints last season, yet still accomplished enough to receive 13 division one offers. Ultimately, Fay committed to the Michigan State Spartans on April 25.

“I felt like MSU was the right fit because I believe their new staff is going to build a winning program. I really felt the culture they had up there with the family/brotherhood feel,” Hamp explained.

Fay finished his year with a 3-0 record, completed 70.3% of his passes for 845 yards with 10 touchdowns to just one interception. He also ran in two touchdowns. In the biggest game of his season, he led All Saints to a 24-17 victory over Parish Episcopal while throwing for over 200 yards and completing 65% of his passes.

“I believe the amount of competitive drive I have leads to my success. I believe the team feeds off of me to win games,” Fay said.

After All Saints won against Parish Episcopal Fay sat out during their 14-2 loss to Bishop Dunne. It was then revealed that Fay was receiving season-ending surgery for a torn labrum.

“Last year we started out strong beating three teams that went to their individual state championships. I thought we had a really good team with a lot of potential but unfortunately, when we beat the number one team in our district it came with a price and I tore my right shoulder labrum,” Fay said. “But the good thing is now I know the potential we have as a team and what we can accomplish next season.”

Expect All Saints with Fay at the helm to be back in the driver seat in 2020.

“I want to take my high school team to a state championship and win it all,” Fay said.

Yesterday, the UIL announced that it intends to allow limited summer strength and conditioning beginning on June 8. Fay though has still been putting in off-season work.

“I’m staying active by working out every day at home and at a gym. I’m also throwing with my receivers daily and working on my craft,” Fay said.

Fay is committed to Michigan State and it’s new head coach, Mel Tucker. The class is ranked as the 28th best class in the nation via 247Sports and even includes another DFW native, North Forney tight end, Kameron Allen.

Hampton Fay, largely due to his injury, is one of the most underrated prospects in all of Texas. He’s a guy who can easily increase his status in 2020 with a successful season. He’s laid the groundwork in 2019 now he just needs to continue to back it up.

Spartans fans definitely got a good one.

“I want the fans to know that we are building a winning program and we’ll bring a lot of energy to go win a lot of football games and championships,” Fay explained.

The “WAIT IS OVER” Prep1 Apparel is Here