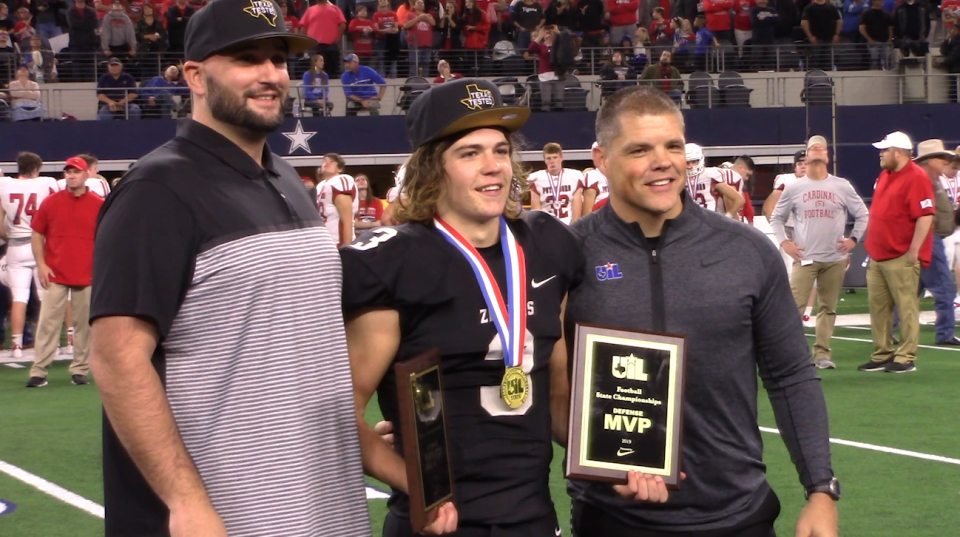 Dane Jentsch from Grandview might be the best player you’ve never heard of.

Jentsch is not only a two-time state champion. He’s also won the UIL State offensive and Defensive MVP… twice!

Jentsch is the Grandview Zebras star quarterback and defensive back.

“My dad has been my coach all my life and he has always raised me to do what’s best for the team. If that’s sitting on the bench and handing out water or playing every position on the field I am going to do what gives us the best chance of winning,” The star Zebra said.

Jentsch has led the Zebras of Grandview to back-to-back state championships in 3A D1. In the past two years, Grandview has a combined record of 29-3. With Jentsch as the signal-caller, they’ve been scoring on average over 41 points a game for the past two seasons as well.

“This football team leads me to success,” Jentsch said. “The way this team plays together is unreal. We have the mentality of everything is about the person next to you.”

Jentsch’s stats have been eye-popping, to say the least. It’s like he’s playing Madden on rookie difficulty. Last year, He threw for 3,349 yards whilst rushing for 1,028. He combined for 58 total touchdowns in 16 games. On defense? How do 133 tackles, eight passes broken up, and eight interceptions sound?

For his Zebras career, he has 6,984 passing yards, 2,745 rushing yards and 126 total touchdowns to his name. Add that to 324 tackles and 10 interceptions and it’s clear to see why Jentsch might be the most impressive player in all of Texas.

“The players, coaching staff, teachers, and parents. Everyone is bought into this program which makes us excel faster than the ordinary team,” Jentsch said on Grandview’s success as of late.

In 2020, Grandview is expected to make a run again as they return seven starters on offense and five on defense. While Jentsch leads the offense to the tune of 41+ points per game, on defense the Zebras let up around 15.5 per game on average.

In order to win three straight titles, Jentsch believes they just need to stick together and keep doing the things that make them successful already.

“We will repeat by doing the same thing we have done for the past three years. Work hard, show up, and play for the person next to you,” he said.

Dane Jentsch is the king of 3A football. You want to be the best, you have to go through him first.

Disappointingly, Jentsch hasn’t had much success in terms of recruiting. As of now, he holds a single offer, one from Texas Wesleyan University.

“(recruiting) is slow. I have one offer so far and very few coaches reaching out to me. Hoping change will come soon,” Jentsch said.

Dane Jentsch is not only maybe the best player you’ve never heard of, he may be the most talented player in Texas period. A guy who is elite on both sides of the ball. There’s no doubt wherever he ends up, he’s going to make a lot of teams, players, and coaches pay.

Watch out for Dane Jentsch because you’ll be hearing his name soon.

I am a godly man and I love my family, teammates, coaches, parents, and siblings,” he said.