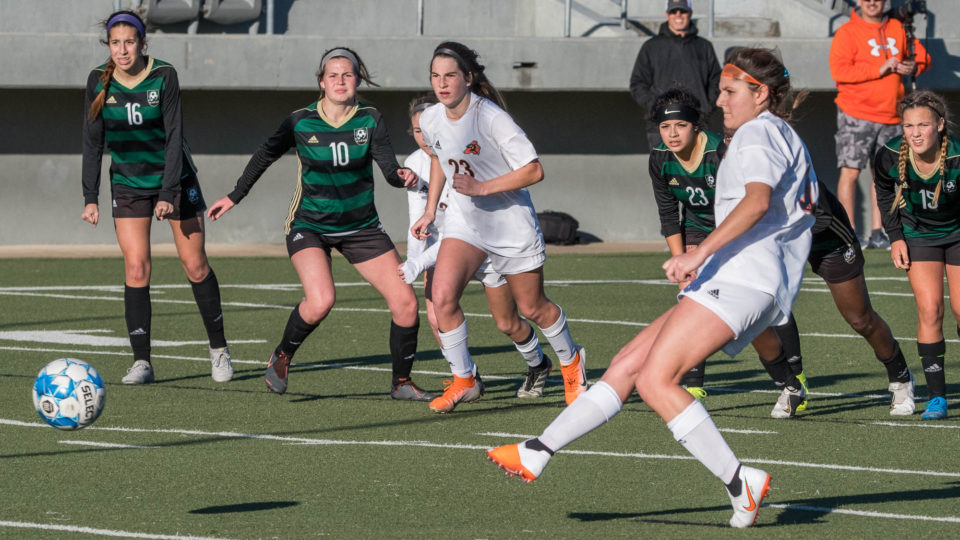 Birdville scored with three seconds left in regulation time to earn a 4-3 victory over Aledo in the championship game of the Birdville Tournament on Saturday.

The goal capped a wild final minute that saw Aledo miss a great chance to take the lead with 45 seconds left in the game.

The Ladycats take the loss despite getting a hat trick from Grace Ornelas, who scored twice on free kicks and once on a penalty kick.

Birdville also got a hat trick from Presley Smith, who scored all three of her goals in the first half to give the Hawks a 3-1 lead at halftime.

Ornelas’ first goal came with 23:40 left in the first half. It was one of many free kicks awarded to Aledo against the physical Birdville squad. Her shot from about 20 yards out never got more than a yard in the air and skipped under the Birdville goalie to tie the score at 1-1.

Two fouls were called against the Birdville goalie in the second half when Aledo was on the attack.

With 20:44 left in the game, Ashlyn Laughley had a breakaway chance and got off a shot as the goalie came charging out of the net. While the goalie deflected the ball, she ran through Laughley, knocking her hard to the ground. The goalie was yellow carded and the penalty kick award to the Ladycats.

Ornelas stepped up and drilled the penalty kick to the right corner of the net to make it 3-2.

The Birdville goalie got called for another foul just outside the 18-yard box when she took the legs out of an Aledo player on a breakaway attempt. On the free kick, two other Aledo players ran at the ball but past it before Ornelas blasted in her third goal of the day to tie the score at 3-3 with 13:09 left of the game.

Aledo’s McKenna Vela had two great chances in the final minutes. A breakway shot from the right side was stopped by the Birdville goalie, then with less than a minute left, Vela got behind the defense on a breakaway.

The Birdville goalie came charging out of her goal at Vela, who ripped a shot from just inside the 18-yard box. The shot got past the goalie, but sailed just over goal with about 45 second left in the game.

The Hawks then quickly moved the ball to the other end and managed to get the ball in the net with three second left after a scramble in front of the net to win the tournament.

Click here to view all the images from Saturday’s game.