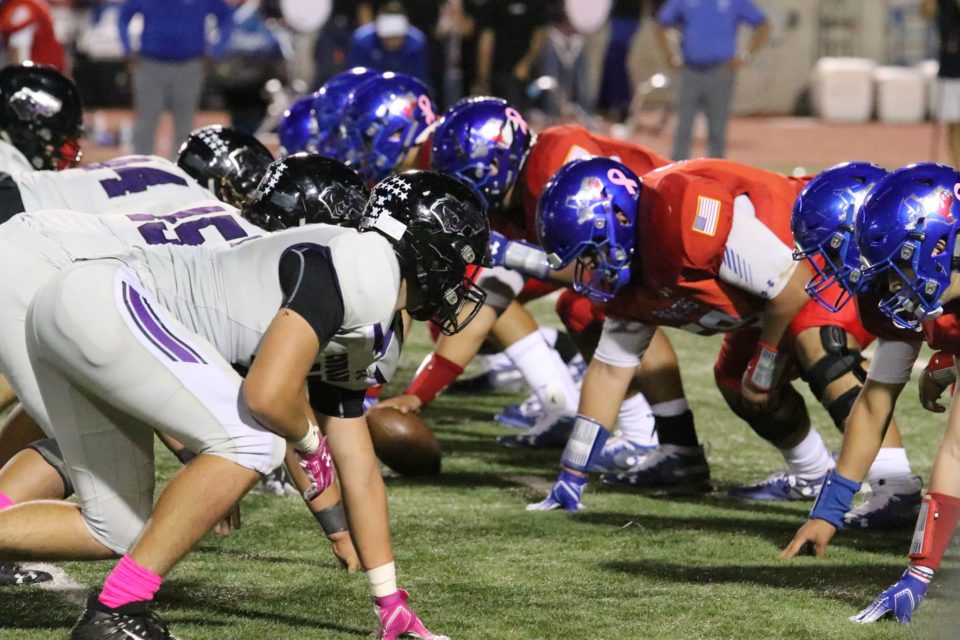 In what many dubbed the game of the year in West Texas El Paso, the Americas Trailblazers came out victorious over the Franklin Cougars by a score of 17 to 13.

Going into the game Franklin was undefeated with key wins over Odessa Permian and Midland while averaging 552 yards of offense and 47 points a game.

Americas came in with only one loss to a very good Amarillo Tascosa team and a strong defense that was number 4 in the nation in totals sacks.

In the opening quarter, Americas came out establishing a bruising run game, only to see their drive end due to a fumbled snap.

Franklin’s opening drive also ended in a fumble but their defense played lights out and was able to hold Americas to field goal.

Americas HS Trailblazers take the lead on a FG‼️

In the 2nd quarter, America’s continued their ground and pound attack led by junior running back Aaron Dumas and he would find the endzone from 2-yards out.

Franklin’s quarterback Danny Walther was unable to establish any sort of a rhythm in the 1st half as Americas defense came up with four 1st half sacks. Americas would go in at the half with a 10 – 0 lead.

Franklin came out on fire in the 2nd half needing only two minutes to score as Danny Walther would find Michael Haack for the 30-yard touchdown strike.

The third quarter would end with the Trailblazers still on top 10 to 7 over the Cougars.

In the 4th quarter Americas would get on the board first due to a 3-yard run from Dumas to put Americas up 17 to 7.

Next Walther would answer right back on a key play on 4th-down, as he found Michael Haack once again, this time for the 20-yard touchdown dagger.

Americas would still lead 17 to 13 as Franklin would miss the extra point with ten minutes left to play.

Franklin attempted an onside kick however it was Americas that came up with the ball and they would continue their run attack, eating away at the clock.

With just over a minute to play, Americas would make their first big mistake of the game as Franklin forces a fumble, Franklin would recover and take over on their own 34-yard line.

Walther would need to cover a lot of ground with under a minute to play, and penalties would plague the cougars.

The Cougars would find themselves with 4th down from the Americas 38-yard line and only 2 seconds left. Walther would scramble and find Gabe Stonewall on the deep pass but the Americas defense would stop him short inside the 10-yard-line.

That would be your ball game as the Americas Trailblazers defeated the Franklin Cougars 17 to 13.

Americas running back Aaron Dumas ended the night with 30 carries for 181 yards and two touchdowns.

Franklin’s quarterback Danny Walther was 11 for 24 for 201 yards and two touchdowns.

The key in this game was the Americas defense as they came up with eight sacks on the night and made things difficult all game long for the Franklin offense.

Marcus is heading to the playoffs

Marcus gets the win over Hebron