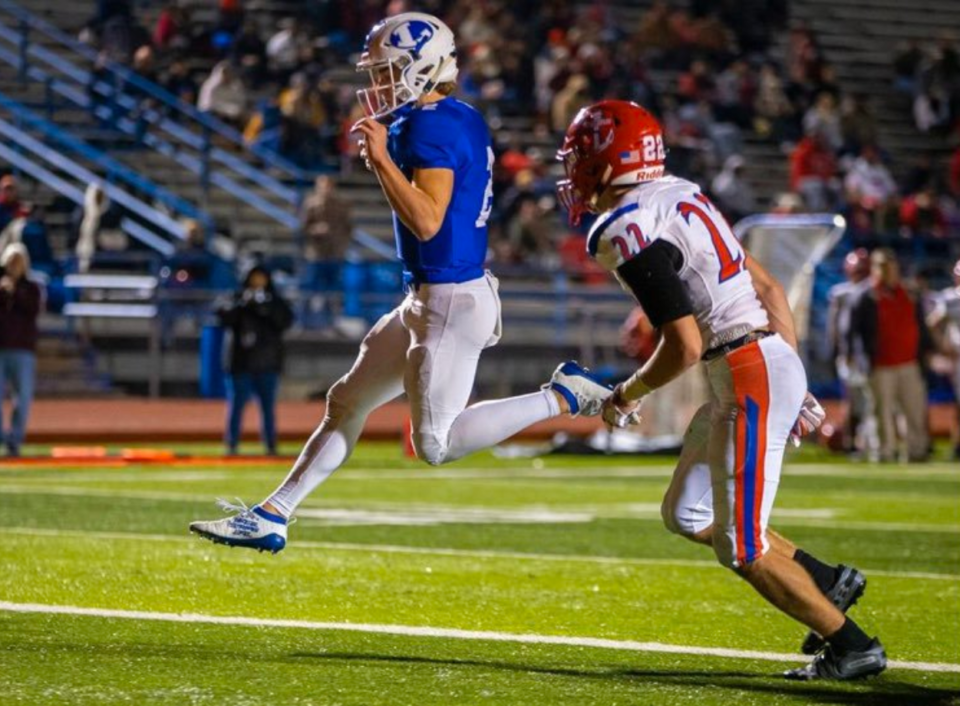 The last time that the Lampasas Badgers won 10 games, was 2011. They were 10-1 before La Vernia knocked them out 36-21. This season, the Badgers are 10-1 and have an area round matchup against 8-2 Gonzales. The thing that can push them over the hump this time around?

A semifinalist in the prestigious Mr. Texas football player of the year award, Whitehead has been absolutely unstoppable this season for the Badgers.

He’s the signal-caller of a team that’s averaging upwards of 50 points a game. He’s completing 70% of his passes on well over 20 attempts a game for over 2,800 yards and an absurd 37 touchdowns in the air to just three interceptions. Add another 500 plus rushing yards and 16 touchdowns and it’s easy to see how Whitehead is one of the best quarterbacks in the state of Texas.

“The guys I have on the outside and the dudes up front are truly the best you could ask for,” Whitehead says. “Right now, I’m just having a lot of fun getting to play ball with my teammates and I hope it continues.”

The best part about Whitehead is that he’s only getting better. Last season as a Sophomore Whitehead led his team to an 8-5 record with 3,400 total yards and 45 touchdowns on just four interceptions. Whitehead is a force to be reckoned with and will be for all of 4A this season and next.

Against Brazosport in bi-district play, Whitehead led his team to a 42-14 victory while having over 300 total yards and five touchdowns in the process.

“It felt great,” Whitehead said. “I thought we came out and for the most part played well. Brazosport had a good team this year and to come out and beat them in the first round gives us a lot of confidence going forward.”

“The key to this year’s team is just trusting the process,” Whitehead says. “When Coach Rogers first got here, he told us, “Trust the process, buy-in.” And we’ve done that. We’ve put in the work and we just love each other and want to play for each other.”

Lampasas is coached by a former quarterback, Troy Rogers. Rogers led Lampasas to a 12-2 season in 1993 and in 2016 returned to his hometown to become its fifth coach in nine years. In his four seasons as the Badgers head coach Rogers has increased his win total every season going from just one win in his inaugural year to 10 in 2019.

Whitehead and Rogers have led the Badgers turnaround in recent years as just two seasons ago Lampasas finished 2-8 while losing each game by 20 points. In his Sophomore season, Whitehead led an offense that was winning games by an average of six points a game. Now as a junior, Whitehead and Rogers’ Badgers are winning games by an average of 32 points a game. Who knows how high that can get come Whiteheads’ senior season.

The thing that speaks louder than any stat out there though, is this team’s character.

After every home game, the Lampasas Badgers, still in uniform will pick up the trash left behind by the fans. They do this in order to take pride in their home field. This Badgers group is filled with men of high class and high character.

For now, Whitehead and the Badgers are focused on getting as far as they can in the 4A D1 playoffs as in area play they take on the 8-2 Gonzales Apaches. The Apaches are led by a defense that only gives up 16 and a half points a game and has held opponents in single digits 40% of the time, including three of their last four games.

“You can expect us to come out and compete every game,” Whitehead says. “We’re going to get better every day and I’m looking forward to seeing how things go.”

“We’ve heard the “Lampasas just isn’t a football town.” We’re just going to continue to go to work, block out the outside noise and let the cards fall where they fall.”

Whitehead wants everyone to know that at the end of the day – “You can expect us to continue to prove the doubters wrong.”

Jax McCauley, Jordan Cochran and The Juggernaut That is the Vandegrift Vipers