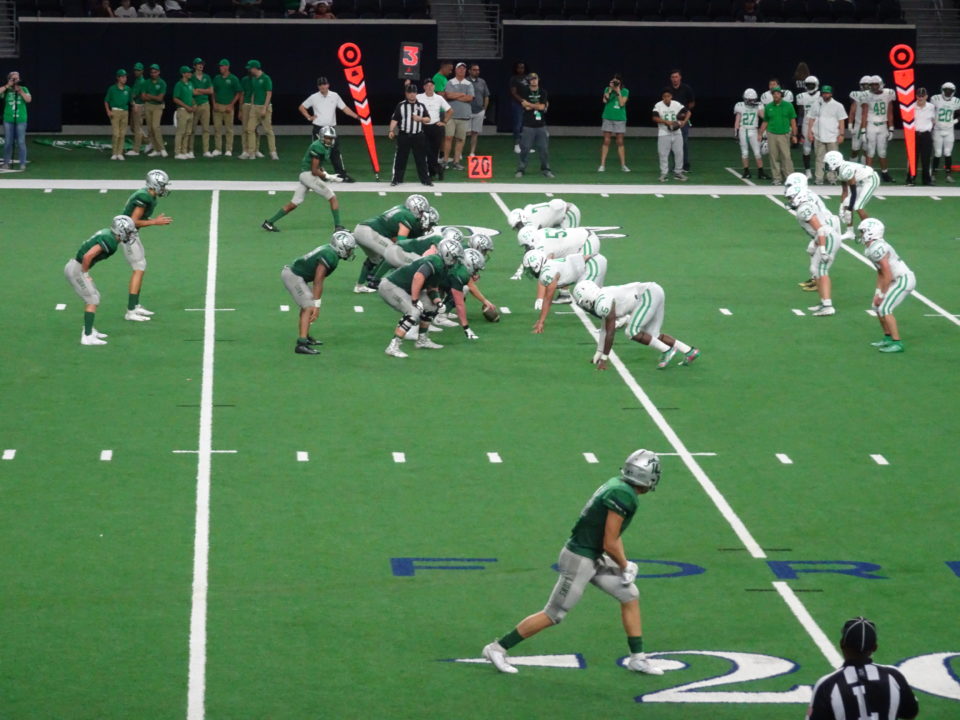 It was an electric atmosphere inside of The Star on Friday night.

Frisco Reedy one week removed from an embarrassing 48-19 loss at the hands of The Colony marched into the Star for their homecoming game and dropped Lake Dallas to 1-2 with a 27-21 victory.

Reedy shot out like a canon and capped off their first drive with a one-yard touchdown run by Junior quarterback and son of Dallas Cowboys Quarterbacks coach Jon Kitna, Jalen Kitna.

Reedy continued their first-half dominance adding a pair of Will Harbour 35 yard field goals and a 37-yard touchdown strike from Kitna to senior wideout Josh Hernandez. By half time it was Reedy up 20-0 and with all of the momentum.

Reedy started off the second half with what could’ve been two more touchdown passes from Kitna only for both of them to go through receivers hands. Lake Dallas would pounce on the Lions’ mistakes.

On their second drive of the second half Senior defensive back, Kobee Minor was in at quarterback and took a keeper 65 yards down the sideline for the Lake Dallas Falcons’ first score of the game.

With five minutes to go in the 3rd quarter, Reedy saw themselves trying to punt out of there own endzone via multiple second-half penalties. Those penalties came back to haunt them at this moment as there usually steady special teams unit had their punt blocked and returned for a Falcons touchdown by Senior defensive end Kelvin Ukah.

All because of a few dropped passes we suddenly had ourselves a one-possession game going into the final 12 minutes of play.

That all changed one minute into the fourth quarter when Jalen Kitna stood poised in the pocket and found his man Hernandez again for a 30-yard strike and a 13 point Lions lead.

The Falcons ended up scoring a late touchdown in the final minute when quarterback Trevor Moon found Jaden Mcgrew for a 32-yard touchdown. But, all hope was officially lost for the Falcons when Senior standout Will Harbour recovered the onside kick for Reedy and it was game, set match.

Jalen Kitna finished his impressive day with 192 yards passing and three total touchdowns as the Lions secured the win for there schools homecoming.

Reedy, after this impressive victory, can wash the taste of their past defeat out of their mouths and focus on a week four away matchup at 2-1 Denison.

Meanwhile, Lake Dallas looks to get back on track at home against Princeton.