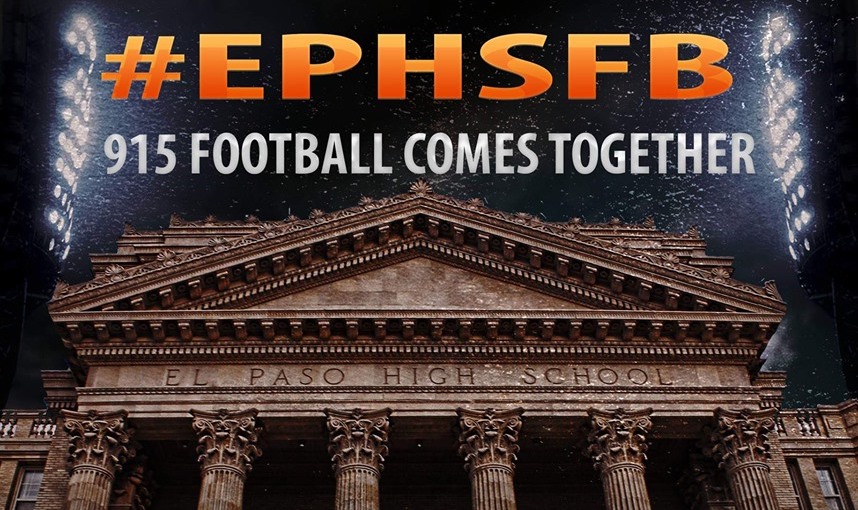 El Paso, TX — In wake of the tragic events of August 3rd, in which 22 people lost their lives and 29 others were wounded, El Paso high school football remembers.

This Saturday night, the El Paso football community will gather together for a special moment at El Paso High’s R.R. Jones Stadium.

Hundreds of local athletes are expected to be in attendance under the lights. The message is simple: #ELPASOSTRONG.

TheOldCoach.com’s West Texas partner Prep1 and the 915 Showcase partnered together to make this happen.

Why was this important to do? Just ask Prep1 CEO and El Paso native Jesse Tovar.

“This incredible community is still shaken and mourning the loss of those who perished,” Tovar said. “In the weeks that followed the shooting, I received so many messages from people sharing ideas about gathering high school football players to do something for the community. They asked me to spearhead the effort.”

Tovar, now a retired deputy sheriff and a former SWAT operator, expressed how he felt on the day of the shooting.

“I felt helpless,” Tovar said. “Feelings of anxiety lingered for days. We used to train for this kind of stuff. You just never expect it to happen in your hometown.”

Tovar is inspired to make good of something tragic, giving back to the community he loves.

“However, the way this city has come together is inspiring. It’s the football community that unites this town. I am proud to call myself an El Pasoan and grateful for the partnership with Ed Stansbury and the 915 Showcase to organize this event.”

“We thank everyone who helped us make this possible,” Tovar said. “R.R. Jones Stadium is one of the trademarks for High School Football and it had to happen at this venue. We thank El Paso Independent School District for allowing us to assemble here.”

Former Houston Texan and UCLA great Ed Stansbury is the Director of Operations of the 915 Showcase. He shared his thoughts on the event.

“As a player at UCLA, living through the awful attacks that happened on 9/11 was gut-wrenching,” Stansbury said. “Following the attacks, we slowly had to pick up the pieces and unite as a country.”

“Taking the field and knowing football was a way for our country to heal was powerful for me. I took great pride in knowing that for a few hours I could be a part of something that could take the minds off of the tragedies.”

“When we were attacked earlier this month, it brought back many of those same feelings, Stansbury said. “The pain, the sadness, the questions of why. Why us, why El Paso. This is my home.”

“Saturday night will be a special night to bring the football community together as one. Players will have that same opportunity I did to help us unite us as one and to show the country that we are, and will always be, El Paso Strong.”

If you would like to donate, click below. 100% of proceeds will benefit the El Paso Victims Relief Fund.