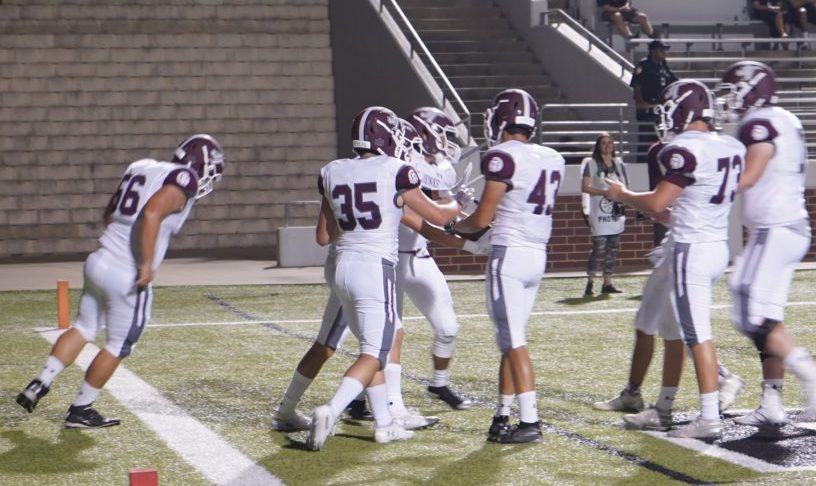 The Jenks Trojans took the five-hour bus drive to Mansfield, Texas with one thing in mind: Walk out of Vernon Newsom Stadium with another victory over Mansfield Legacy to finish the Border Brawl series between the two schools.

Thanks to the Trojans defense, Head coach Keith Riggs and his team left Texas with a 34-0 Victory and a 2-0 against the Legacy Broncos.

Jenks keep the Legacy offense in check all night, only allowing 57 total yards of offense and 5 first downs all game while also forcing two turnovers during the night. Throughout the whole game the Trojan defensive line was able to force Legacy Quarterbacks Andrew Smith and Dante Chaney out of the pocket quickly which forced them to consistently run or try and throw a quick pass to a receiver.

While the Trojans were led by the defense tonight. The Offense more did its part as well, lead by the potent passing offense of Stephen Kittleman. Kittleman sliced through the Bronco secondary all night, connecting with receivers Justin Murphy and Bo Estes ten times for 145 yards. Murphy constantly used his size throughout the night to get open and Legacy had no answer for him.

Mansfield Legacy running back Ayo Adeyi was the silver lining for the Legacy Broncos today, Adeyi showed great burst and acceleration that will get to be showcased throughout the season. If the Broncos can get some blocking behind him, they could have an answer to the troubles they had in the ballgame tonight against Jenks.

Jenks finishes the series 2-0 and kicks off This year’s series 1-0 in favor of Oklahoma over Texas. Mansfield Legacy will look to rebound against the Crowley Eagles on September 6th in the second non-district matchup they have this season.