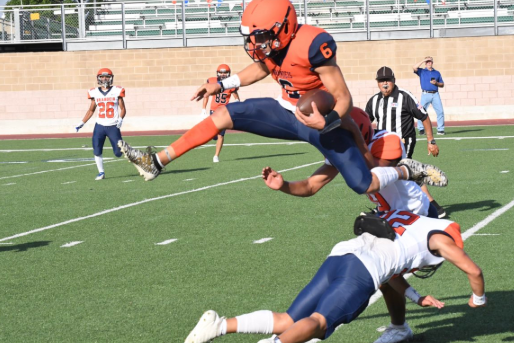 With 10 minutes left to go in the second quarter Brandeis High School, who came in at 12-0, saw their season slipping away as they were falling behind quickly to Vela. The response? Letting dual-threat quarterback Jordan Battles do his thing.

By halftime, the game was already tied due to a 21-yard keeper followed by a 58-yard bomb to Josh Suarez. The game would see one more touchdown in the third, that being another strike to Josh Suarez from 10 yards out and Brandeis would hold on to win the game 21-14. With the win, Brandeis moves to 13-0, their most wins in school history, and have clinched a spot in the 6A D2 quarterfinals.

“The key to my personal success is my offensive line and running backs, those guys block their butts off and work hard so without those guys I can’t do what I do!” Battles said.

Battles finished the game with 248 total yards and three touchdowns as he contributed 85% of the Brandeis Broncos’ total yards on the day.

Battles has done it all for the Broncos this season as the 13-0 mark is the most wins in school history.

“The difference in this team is our focus and the preparation we have had all spring and all summer,” Battles said.

Battles and the Broncos’ lead one of the most potent rushing attacks in all of Texas as they have been averaging nearly 40 points a game along with with nearly 300 team rushing yards a game. The Broncos have eclipsed that 300-yard mark at least six times even making it to 400 once.

The junior quarterback has been electrifying to watch all postseason as in the Broncos’ first three games he has accounted for 447 rushing yards with 4 touchdowns. He’s also added three more touchdowns through the air along with 300 plus more yards through the air.

“Just mentally preparing for upcoming games and never look past any opponent,” Battles said on his teams’ success.

Brandeis has had a record-breaking season and one that will go down in the history books for the Broncos. But, to continue into the 6A D2 state semifinals they have one more hurdle, Austin Westlake.

Jordan Battles, the 2018 6A district 28 1st team offense quarterback was at the helm last year as a sophomore during that loss but with another year under his belt and a perfect record, looks to get over the Westlake hump.

“You can expect Brandeis to fight,” Battles said. “We started slowly vs vela, that’s why we were in a dog fight, but it won’t happen again!”

If Brandeis wants to finally reach the state semifinals and a shot at the biggest prize in all of Texas it’ll come from the all-around talent that Battles and the rest of the Broncos possess.

“When coaches come out to watch they’re going to see a different breed out there, believe that!” Battles said.

Battles and the Broncos will meet Westlake for the second straight year inside the Alamodome this Friday night.

For Westlake? A chance at football championship number two for a storied football program. At stake for Brandeis, a chance to show Texas that they can win the big win and show everyone that the Broncos have arrived.