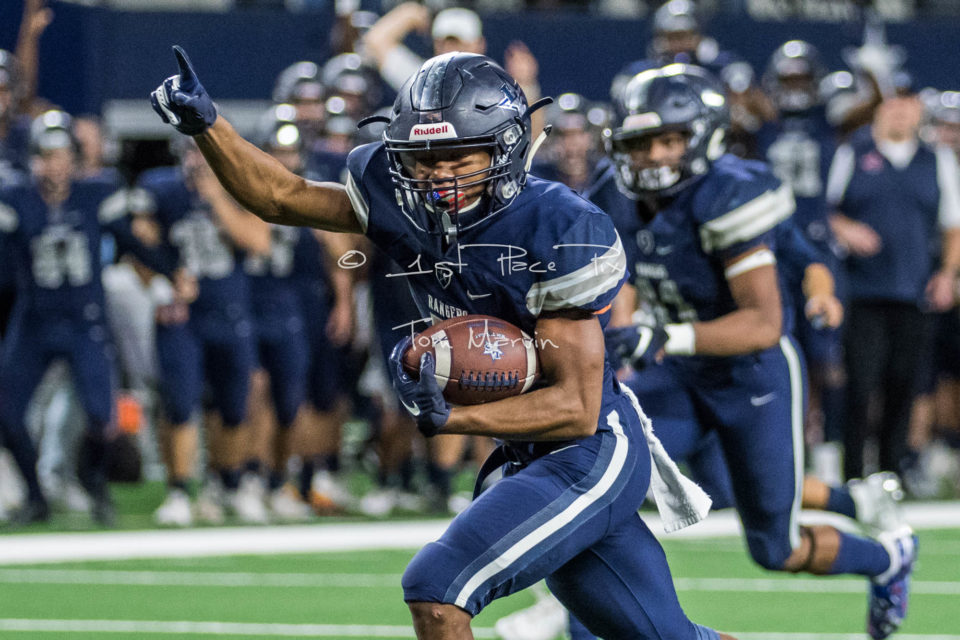 “Honestly, it felt amazing,” running back Jaden Nix said. “Truly blessed to have that opportunity to do that for my team. Credit to the offensive-line on that play for making the hole wide open. I did the easy part on that they did the hardest job.”

Those are the words of Frisco Lone Star’s Jaden Nix after he scored the game-winning touchdown in overtime to knock Highland Park out of the playoffs.

Frisco Lone Star has been the most dominant team in all of 5A this season. The Rangers put the whole state on notice when on September 13th they went into Highland Park and beat them 30-19. The win snapped Highland Parks 33 game winning streak as well as handed the Scots only their 2nd home loss in over 20 years.

Yet, in order to reach the regional finals and give their team a shot at a state championship, they needed to knock off Highland Park one more time, this time at AT&T stadium.

AT&T Stadium is known as the home to the Dallas Cowboys but it may as well be the second home to Highland Park as well. The Scots coming into the game were the reigning three-time state champions, winning each state championship inside AT&T. When the lights are shining brightest, the Scots step up to the plate.

“Both times we played these guys we knew there would be adversity so we battled through the good and bad times and kept fighting no matter what,” wide receiver Trace Bruckler said.

There’s no denying that a lot of success for the Rangers this season has come in part due to Oklahoma commit Marvin Mims. Mims is one of the best players in Texas period. This season Mims has caught 91 passes for a ridiculous 2,237 yards and 29 touchdowns. He’s also thrown for one as well.

Mims in the first matchup against Highland Park caught 10 passes for over 200 yards and two touchdowns. There was no doubt he put the Scots defense on notice and they would more than likely be double covering him for most of the game. Mims, no matter what is still going to make his presence known but Lone Star still needed another playmaker for when Mims couldn’t.

“My success came from my teammates and most importantly my QB, Garret Rangel, who continuously placed the ball exactly where it needed to be for me to make a play,” Bruckler said.

Rangel is a sophomore who in 13 games has put up a hair more than 4,200 yards with 46 touchdowns. The Lone Star offense is a who’s who of talent.

Rangel threw for over 400 yards and three touchdowns in the house that Jerry built and he needed each one of those yards to beat the Scots again.

A back and forth ball game saw Highland Park lead the Rangers 24-20 with just under four minutes to go. Lone Star was facing a 4th down and six from the Scots’ 16-yard line. Rangel snapped the ball, sat back in the pocket before lobbing it up towards Mims’ way. The Oklahoma commit, between two defenders, made a miraculous play on the ball to give the Rangers the three-point lead.

The Scots followed that miraculous play with a drive of their own led by Chandler Morris that put the Scots offense in the red zone with a minute and a half to play. The Rangers defense needed to make three stops to force a field goal and send the game to overtime.

Good thing that the Rangers, along with their offense, have one of the best defenses in the state as well.

Headlining that defense that has allowed offenses to put up just under 14 points a game is linebacker and Utah commit Jaylan Ford.

“We try to just play our game and prepare like we do every week, and I think the biggest part about our teams’ success is the brotherhood we have, we play for each other,” Ford said.

Ford’s defense has held Highland Park to their two lowest point totals of the year and even while playing only three quarters a game for most games still finished the regular season with over 140 tackles. When asking about his personal success, Ford showed what Lone Star football is all about.

“I never focus on the individual stats, I just play, do what I’m supposed to do.”

Ford and the Rangers’ defense did their job and forced Highland Park to go for a 40-yard field goal and off to overtime we went.

Highland Park started with the ball in overtime, and immediately went three and out. On third down Morris dumped it off to his running back but the tackling machine that is Jaylan Ford made the play to force another Highland Park field goal attempt.

History did not repeat itself with the next kick however as the Scots kicker pushed it wide left and with that the best they could hope for was a chance in double overtime.

With a first and 15 at the Scots’ eighteen-yard line, however, the Rangers offensive line and Jaden Nix had a plan of their own.

A hole opened up right up the middle and Nix busted through it all the way to the endzone and the victory.

“No matter what goes on in the game I know the person next to me has my back,” Nix said. “We could be down by 100 but we’ll still battle it out and find a way to win altogether.”

“We do what we are coached to do,” Ford added. “We do our jobs and they all connect.”

With the win, Frisco Lone Star moved to 13-0 including two wins over Highland Park on their resume. The Scots season ends at 11-2 and for the first time since 2015 5A D1 will have a new champion.

“Keep on preparing at a championship level and not worry about who our opponent is but about the amount of work we are putting in,” Bruckler said on his teams’ success.

“From the coaching staff to the players, trainers, managers, etc. we had a job to do and we took advantage of it,” Nix added on the big win.

Frisco Lone Star has all the momentum in the world, and they will need it as their next opponent in the regional final is the 11-2 Lancaster Tigers.

“Expect us to play hard and fight until the last whistle all throughout our run,” Bruckler said.

Lancaster on its resume has stopped three of the most potent offenses in all of Texas during the playoffs. With wins against the high powered The Colony, Mckinney North, and Independence, Lancaster has shown that they won’t just lie down and let the Rangers march up and down the field.

“One game at a time,” Ford said about the future. “That’s how we have to see it, our coach always says no one can beat us when we’re at our best so that’s what we strive for.”

“We could be playing the Patriots and still take them on feeling confident,” Nix added.

Frisco Lone Star and Lancaster will meet at Wilkerson Sanders Memorial Stadium in Rockwall Friday night for a chance to go to the state semifinals.

Lone Star has had double-digit wins every single year since 2015, yet that state title eludes them. The last time the two schools faced off, 2015 in the regional finals, Lone Star won 49-34.

“I want to go win a state championship with my team,” Ford said.

But at the end of the day, Lone Star football is about one thing. In the words of Jaden Nix – “playing as one big family.

The After that ‘Reigns’ Activity Is A Apple mackintosh Arcade Exclusive

Jenks drops the Texas Hammer on Mansfield Legacy in a shutout