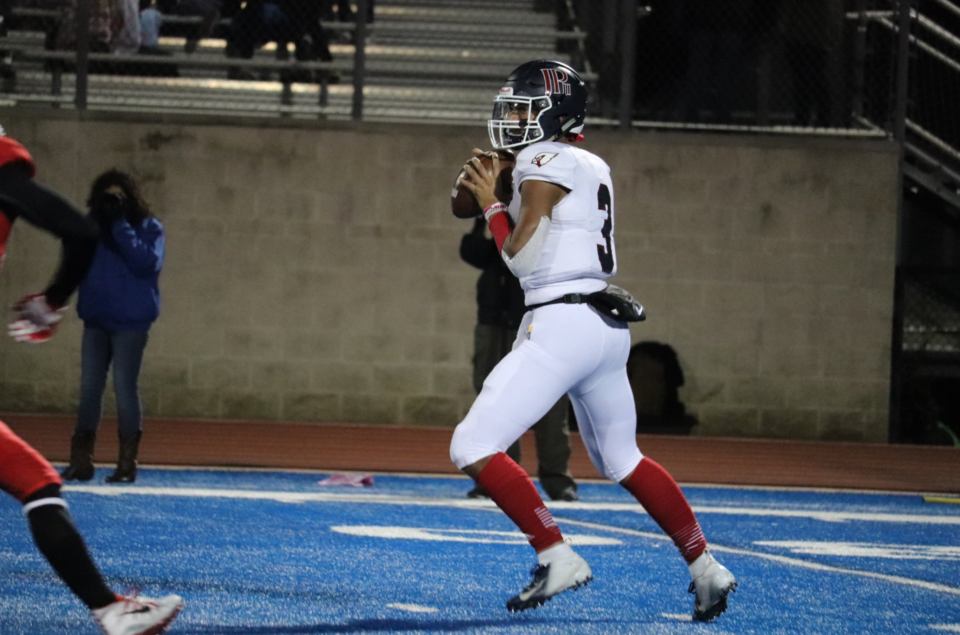 “It feels good to go in as an underdog and beat a team that nobody thought we would beat in a million years, but we have celebrated that game and now it is on to round 3,” linebacker Kyle Taylor said.

“It feels amazing especially knowing this is history for our school and to be apart of that is something special,” quarterback Grayson James added.

Those are some of the quotes of football players at John Paul II. Plano’s shining hope after Plano, Plano West, and Plano East all failed to make the playoffs. With a win over previously undefeated Nolan Catholic on Friday Night, John Paul II now find themselves in the semifinals against Antonian Prep.

John Paul II in Plano is a private Roman Catholic college preparatory high school. They have less than 800 students yet the football team is 9-3 and has made a run to the TAPPS D1 semifinals.

“We use every snap to get better and push each other always,” James said.

“Our key to success is our motto, Outwork Everyone,” Taylor added.

John Paul II was opened in 2005 within the Roman Catholic Diocese of Dallas. In such a short time the school has shown some growth in athletics. The basketball team had a state finals appearance in 2014 as well as the men’s soccer team in 2016 yet that first title still eludes them. In 2019, the football team looks to add that first banner.

The Cardinals of John Paul II finished the regular season 7-3 and 3rd in their district to qualify for the TAPPS D1 playoffs. A first-round tight win against Central Catholic 21-16 followed by a 49-15 thrashing of Nolan Catholic and the Cardinals now find themselves in the semifinals against Antonian Prep.

“It feels amazing, I mean the sheer joy in being able to have this moment with a fresh team feels amazing,” linebacker Max Mazur added.

“Felt great, but we are focused on the next upcoming week vs Antonian Prep,” safety Trey Spann added.

While the Cardinals have a successful history in basketball and soccer football remains one of their weak points. Before 2019, the Cardinals boasted a disappointing 20-112 record from 2006-2018. That includes four winless 0-10 seasons, including three consecutive from 2014-2016. Their highest win total? Four wins just last season. The 2019 Cardinals are the best in team history and they don’t want to stop anytime soon.

“Our success is really based on our work ethic in the classroom by keeping every single player eligible as well as our hard work and energy at practice,” Mazur said.

“Coach Brooks motto is ‘DYJ’ do your job, and that’s what we go off of as a team,” Spann added.

A top reason for the Cardinals’ success in 2019 is due to the outstanding play from junior quarterback, Grayson James. James this season is a hair shy of 3,400 passing yards with 37 touchdowns to go with it.

“For me, a lot of it goes to the time I’ve put in this summer and all my years before,” James said. “My coaches are the best in the business and I could not be more thankful for them.”

James on the biggest spotlight of the Cardinals season against Nolan Catholic threw for over 400 yards and combined for six total touchdowns on the day.

The defense, which held Nolan Catholic to it’s lowest point total of the season, is only letting up 21 points a game and the unit consists of a who’s who of talent.

Kyle Taylor, a linebacker who leads the team in sacks with 16 as well as over 100 tackles. Max Mazur is also over 100 tackles with five sacks to his name, including a key forced fumble vs. Nolan Catholic. Trey Spann among the team leaders in interceptions with three on his resume. All of whom are juniors for the Cardinals defense.

“Personally, I just put everything I have into every game,” Mazur said. “I don’t let myself have any energy I play every special team and 2 positions on defense ‘I want to make plays’ is my mindset every snap of the ball.”

“The key to my personal success this year is my mindset to show all the people who didn’t believe in me or doubted me what I can do on the field,” Taylor added.

Trey Spann concluded by saying “Just trusting my technique, watching the film and paying attention to detail at practice and I bring it all into the game.”

If the Cardinals want to keep their season rolling they will have to knock off Antonian Prep, who is coming off of an emotional win themselves after beating Prestonwood Christian on a last-ditch hail mary effort.

“We’re in an unprecedented place for the team, but we are going to go out and battle like always and take the game one play at a time,” James said. “We know what we are capable of and that can take us a long way if we execute.”

“I think your gonna see a jp2 team that’s more than ready to throw 40 on the board again,” Mazur added.

John Paul II this season has been the best team in Plano and this playoff stretch has even shown they’re state championship material.

What can we expect from the Cardinals moving forward? – “State Championship and nothing less than that,” Taylor said.