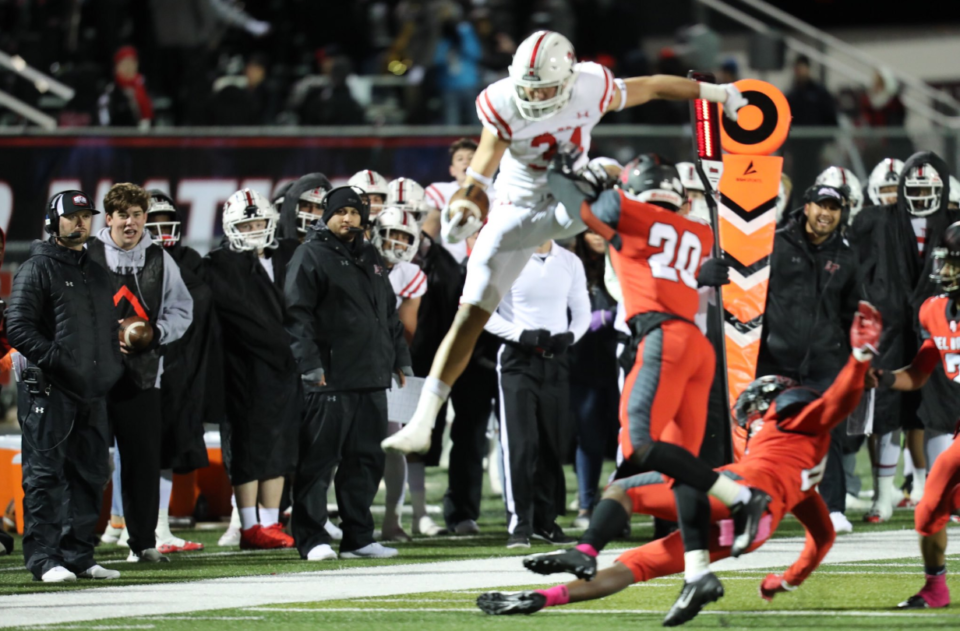 Since 2007, Lake Travis has won six state championships, including a state record five consecutive between 2007-2011. Their name is associated with greatness throughout the state. Dynasties are necessary for sports, they make the game interesting. Lake Travis is one of the biggest dynasties the state of Texas has ever seen.

Lake Travis high school is located 20 miles outside of the state capital in beautiful Austin, Texas. The public school is a 6A program that houses more than 3000 students. The best part though? They’ve been consistently dominant for a period longer than some of their current players’ ages.

Since 2004, the Cavaliers have an astonishing record of 198 wins to just 24 losses. That’s good enough for a win 89% of the time. Statistically, since 2004, Lake Travis is more likely to win a game than Dirk Nowitzki is to make a free throw.

In that time frame, they have three perfect 16-0 seasons. The most losses they’ve ever had in a season in that same period? Just three. The Cavaliers are greatness personified.

To put their greatness even more into perspective, since 2004 the Cavaliers have a point differential of 5,750 points. That essentially means that on average the Cavaliers are winning by 26 points every time they come out onto the field.

A lot of exceptional players have walked through Lake Travis’ doors and with them brought success. Quarterback Garrett Gilbert led them to three consecutive titles from 2007-2009 even becoming the first Texas high school athlete to win the prestigious Gatorade National Football player of the year. 2018 first overall pick Baker Mayfield even left his mark on Lake Travis. But one constant source of success, head coach Hank Carter.

2019 is coach Hank Carters’ 10th season as the Cavaliers coach. With that, he’s become the winningest coach in Cavaliers history (124) and has more state titles than any coach in its history as well (3). Coach Carter was also responsible for two more Lake Travis championships as he served as Defensive Coordinator for the team as well in 2008 and 2009.

With such success in such a long period of time, one would naturally think “when is this finally going to stop?” the answer? Not anytime soon.

The Cavaliers have started 7-1 to begin the 2019 season. They’re on average scoring more than 45 points a game whilst giving up only 15. More importantly, they got a huge win over in-town rival Austin Westlake, a team that has given them four of their 24 losses since 2004.

Senior quarterback Hudson Card has been exceptional through seven games completing over 67% of his passes for 1,660 yards, 19 touchdowns to only two interceptions. The Cavaliers also have a two-headed snake in the form of two senior wide receivers who are putting up ridiculous production thus far.

Senior Kyle Eaves leads the team in catches and receiving yards with 49 and 880 respectively while also hauling in eight touchdowns. Grayson Sandlin, however, isn’t too far behind with 37catches himself for 627 yards as well as nine touchdowns himself.

It hasn’t been all sunshine and rainbows however for the Cavaliers as for every action there is a reaction. They may have beat edged out their rival Westlake by a single point, but Card is now lost for the season with a foot injury. He has played his last game as a Cavalier.

The Cavaliers had their bye week after the Westlake game allowing them to get junior quarterback, Nate Yarnell some extra reps before his first start of the season against at the Del Valle Cardinals. Yarnell looked as good as he could be considering the circumstances completing 65% of his passes for 222 yards with a pair of touchdowns and interceptions. The Cavaliers relied heavily on their running attack as they ran the ball 63% of the time for 145 yards and three touchdowns as a team.

If the Cavaliers want to keep their dynasty going it may have to rely more and more on the defense.

This season the Lake Travis defense has been impenetrable. They’ve allowed the fewest points in district play (66) through six games, including two shutouts on the year. One big reason for their success on that side of the ball, however, is senior Trey Sofia.

Sofia in his senior campaign has put up quite the resume with 49 total tackles including a team-leading 11 for a loss with four and a half sacks and two forced fumbles.

Sofia first got inspired by playing football from his family and the Cavaliers.

“Just growing up in such a football influenced environment and watching football with my parents, and going to Lake Travis games at such a young age really got me into playing when I was little.”

Despite the loss of Card, Sofia isn’t worried about the rest of the season.

“For the rest of the season, we plan on finishing our district with the district championship and taking that momentum into playoffs to make a state championship run.”

Lake Travis’ only loss of the season was in the season opener, by 21 points at the hands of now 7-1 Martin. If there has been a flaw to their dominance, it’s season openers. Through the last eight seasons, Lake Travis is 3-5 in such games.

Sofia, however, likes to see the good in his team’s early setback.

“I think after our first loss we really rallied as a team and re-evaluated ourselves and came out with a different intensity than we did vs Martin. I also think the aggressiveness and speed we’ve been playing with especially as a defensive unit has been a real problem for the teams we’ve played so far and we just keep building every week and I’m really looking forward to seeing what we do in the playoffs.”

Sofia doesn’t feel the pressure to live up to Cavaliers teams of the past, in fact, it motivates him and his teammates.

“I think that our senior class especially knows that this is our last shot to play together and add another state championship to our programs accolades and it motivates us a lot to be one of those teams that go down in our schools’ history and is remembered forever.”

When asked however about his own personal success Sofia had to say, “ I think competing with such a talented offensive line and quarterback all spring and fall has really helped me prepare for the teams we play on Friday nights. Also, my coaches helping me perfect the little things and really cleaning up my game and building every week has really helped me a lot. Also film study on our opponents and watching practice film to clean up assignment errors and technique errors I made so that I can really have an edge when it comes to Friday night.”

No matter which way you cut it, Lake Travis is one of the most impressive stories in all of Texas. The fact that they are able to acquire such top talents such as Trey Sofia each and every year is absurd.

Lake Travis though might have one of their toughest games of the season coming up this Friday night, November 1st, when 7-1 Hays comes to town looking to knock Lake Travis off of their throne. One knock on being a dynasty is that you’re going to get every team’s absolute best shot.

But as we’ve seen through the years, it almost doesn’t even matter. Lake Travis has found ways to win for 15 years plus, and it doesn’t look like it’s stopping anytime soon.