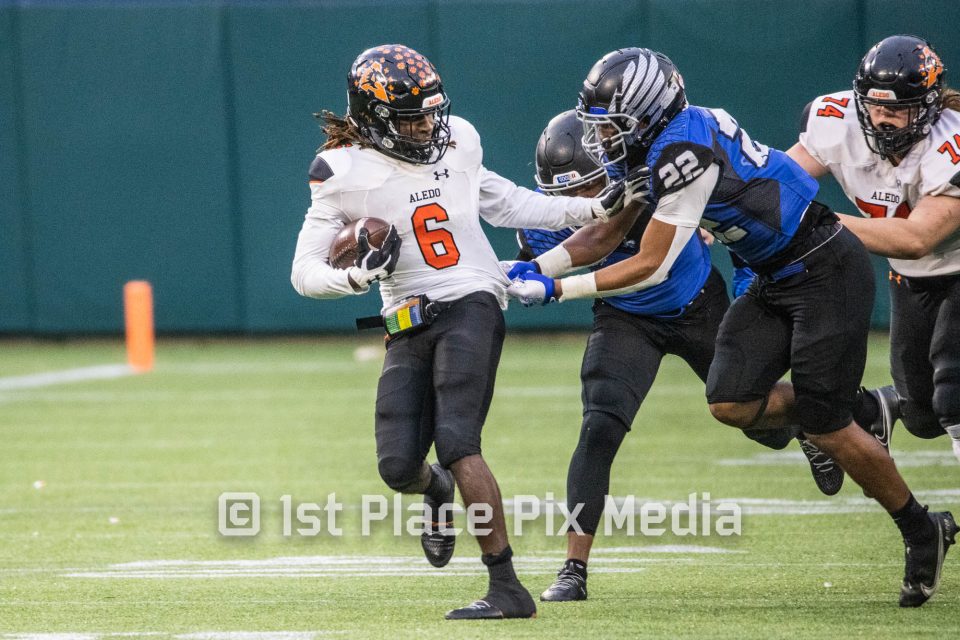 DeMarco Roberts rushed for 224 yards and four touchdowns as Aledo used a big second half to take a 49-24 area round playoff victory Friday over North Forney at Globe Life Park in Arlington. JoJo Earle added three touchdowns for the Bearcats, two on runs out of the Wildcat formation and one on an 84-yard punt return.

Roberts said the game plan was “ground and pound” to use the Aledo run game to wear out North Forney.

Instead of ground and pound, it was more like ground and gash. Roberts averaged 8.4 yards per attempt on 27 carries as he finished with the best game of his career.

On a couple of third-and-long plays in the first half, Roberts gashed the Falcon’s defense.

On third-and-seven from the Falcon 39, Roberts broke free for a 33-yard run to give Aledo a first and goal to set up their second TD of the game that gave the Bearcat’s their first lead of the game, 14-7. Earle scored both those early touchdowns on runs out of the Wildcat formation.

After North Forney got a safety to cut the lead to 21-9, Earle fielded a punt on a big hop along the right sideline and got some good blocks and made a few defenders miss on the way to an 84-yard run to pay dirt to make it 28-9 with 4:34 left in the first half.

North Forney managed to score on a fourth-down pass just before half to cut the Aledo lead to 28-17.

The second half belonged to Roberts and Aledo.

On that last TD run, Roberts made a jump cut in the hole to make a defender miss and get to the outside to get into the endzone. Roberts was finished for the night after his fourth TD run.

North Forney scored its final TD with less than a minute left in the game.

Aledo only threw 11 passes in the game, but the Bearcats ran the ball 42 times for 290 yards.

On defense, the Allen brothers each had an interception for the Bearcats. Junior safety Bryan Allen stopped North Forney’s second offensive possession with an interception and gave the ball to the Bearcat offense who used the turnover to take the lead.

In the third quarter, freshman cornerback Jaden Allen picked off a pass to help Aledo pull away.

Aledo coach Tim Bushanan also gave credit to athletic director Steve Wood, who jumped put on a headset to help fill in for the two coaches who are in quarantine.

Coach Buchanan said the Bearcats will likely play the winner of the South Oak Cliff-Frisco game on Christmas eve.