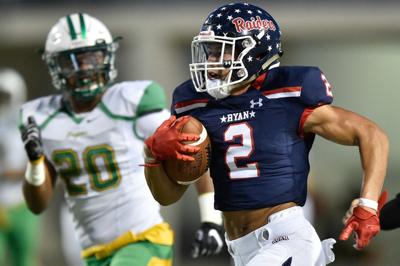 Birdville came to play early, forcing a turnover’s within the first minute of the game, capitalizing on it on their first drive to go up 7-0. Ryan’s offense looked to bounce back, driving right down the field with ease, until they missed a field goal from the 18-yard line. The Hawks capitalized with their second straight touchdown drive, taking an early 14-0 lead.

Then, the Raiders finally woke up.

Led by QB Seth Hanigan, the Raiders weren’t going to let their undefeated streak end, putting up 42 straight points before the Hawks could score again.

2020 ATH Spencer Sanders brought Ryan within seven late in the first quarter for a 14-7 score after 12 minutes.

The Raiders defense made their first stop of the night, forcing a punt that Emani Bailey immediately converted on, tying the game up on a 54-yard rushing touchdown. The defense continued to dominate, with back-to-back interceptions. Sanders came up with the first pick, setting up his own touchdown minutes later with a 13-yard reception as Ryan took their first lead of the game 21-14.

Billy Bowman Jr. came up with the second interception, returning it for a touchdown for a two-score lead with eight minutes remaining before halftime.

Sanders’ third touchdown of the night came late in the half as Hanigan hit the 2020 athlete from 30 yards out for a halftime score of 35-14.

Denton Ryan came out firing in the second half, forcing another stop and scoring their sixth straight touchdown to take a 28 point lead, 42-14.

The Hawks, who had trouble getting a drive together since early in the first quarter, finally found the end zone with three minutes remaining in the third quarter.

The Hawks defense big came up big on the ensuing possession, giving the offense a chance to get back in the game. However, a promising drive turned sour as Stanley Nwosu came up with the Raiders’ third interception on the night.

The Raiders capitilized once again, as Bowman came up with his second touchdown of the night, this one through the air, for a 13-yard score to put the game away with a little under five minutes left in the game.

Denton Ryan finishes their regular season undefeated and officially clinch a district title. They head into a playoff matchup next week.

For Birdville, while they couldn’t seal a district title, their season over yet, as they finish 9-1 on the season, with a playoff matchup still firmly intact.