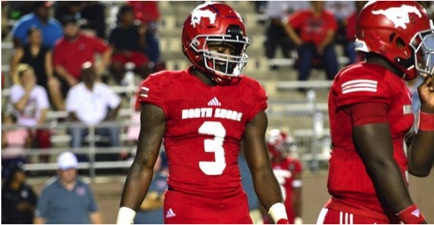 In their fourth meeting in three years, North Shore came up when in counted with their second win against Katy this season. After a defensive slugfest to open the season, tonight’s matchup was the complete opposite as the Mustangs ran away 49-38.

North Shore opened the game with a bang, as sophomore standouts Dematrius Davis and Shadrach Banks connected for a 61-yard touchdown on the first play from scrimmage. The Mustangs defense clamped up on defense, holding Deondrick Glass and the typically potent Katy offense. After forcing a punt, the Davis-Banks connection struck again for a 29-yard touchdown to take an early 14-0 lead.

Katy adjusted quickly and turned to the air and Bronson Mclelland threw a touchdown of his own to bring the Tigers within seven at the end of the first quarter.

The Tigers defense finally made a stop and tied the game up on a long touchdown pass of their own as Mclelland found Jordan Patrick for a 57-yard score. Unlike previous matchups, North Shore wasn’t fazed after a momentum swing and on the ensuing drive, Davis threw his third touchdown of the night, a screen pass to Chance Pillar which he carried 78 yards for the touchdown. The back and forth continued as Glass finally broke through, running it in from two-yards out to tie the game up at 21.

Katy came out driving to start the half, but a sack stalled their opening possession and the Tigers settled for a field goal to bring them within four. North Shore didn’t slow down, riding the backfield duo of Davis and five-star RB Zach Evansto another score, another passing touchdown, this one to DE Jordan Revelsto put North Shore up 35-24.

At the end of the quarter, Katy was driving and to start the final quarter, Mclelland punched it in himself to bring Katy within four, 35-31.

The Tigers regained momentum on the ensuing drive, coming up with an interception with a chance to take the lead. In their desperation, Katy went for it on fourth down and failed, allowing the Mustangs to regain momentum. Evans hadn’t found an opening all game, but he finally found one, running it in from 61 yards out to take a 42-31 lead with four minutes left in the game. The Mustangs continued to roll, with a pick-six to put a cap on the game 49-31.

North Shore has now beaten Katy twice this year, this time in an offensive shootout. Led by a young offensive trio in junior Evans and sophomores Davis and Banks, the Mustangs roll on towards the Quarterfinals where they’ll face the winner of Atascocita and Cy-Fair.

Grapevine Dominates the Battle of the Red Rail