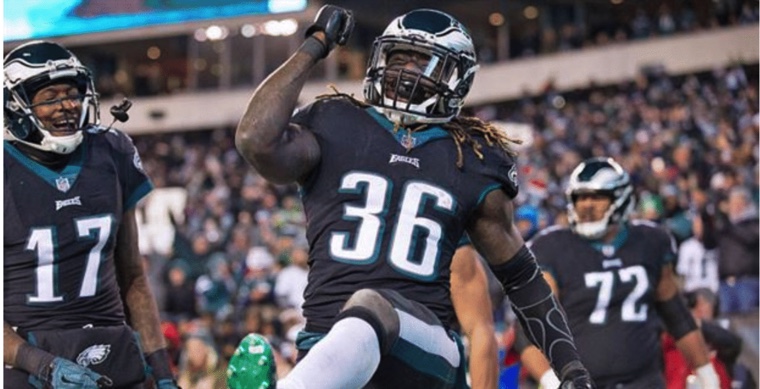 The Philadelphia Eagles have the world’s attention. Especially Britain’s.

From an NFL-best 13-3 record to the emergence of star quarterback Carson Wentz, the first-place Eagles have been borderline unstoppable.

With a win over Minnesota on Sunday, Philly will punch its ticket to the Super Bowl, marking the team’s first trip since 2005.

As a British native, I’ve taken it upon myself to bring one fact to everyone’s attention.

This year we could see the first British running back to ever play in a Super Bowl.

As a London boy, Ajayi’s dream was always to play for local football (NOT SOCCER) club Arsenal.

However, after moving to the U.S. in 2000 at 7 years old, Ajayi would discover another kind of ‘football’.

Later playing for Frisco Liberty High School (Frisco, TX), Ajayi would run for an incredible 2240 yards and 35 touchdowns in his senior year

Advancing to Boise State University, Ajayi tore up defenses in his junior year with over 1800 rushing yards and 32 touchdowns.

Following his breakout on the Broncos, it was clear that Ajayi was destined for NFL glory.

After sliding down draft boards thanks to recurring knee issues, the Boise State product was drafted in the 5th round of the 2015 NFL draft by the Miami Dolphins.

Despite a successful sophomore campaign in Miami in 2016, rushing for 200 yards in back to back games, the Dolphins shipped their Pro Bowl rusher to Philly.

An already dominant Eagles team landing one of the league’s premier up-and-coming backs made Halloween especially scary for NFC competition.

Miami would go on to miss the playoffs as Ajayi would proceed to average 5.8 yards a carry for the now NFC Championship bound Eagles.

The proud Englishman and avid tea drinker may make history this weekend.

A win on Sunday vs the Vikings would make Ajayi the first British offensive player to ever play in a Super Bowl.

Previous British NFL players — Patriots’ Marvin Allen and Steelers’ Scott McCready — are both able to flaunt their Super Bowl rings for their participation on the practice squads throughout the ’02 and ’07 seasons.

However, neither of these players actually saw the field.

Should Philadelphia reach its second-ever Super Bowl, Ajayi could join Umenyiora and Tynes as a Super Bowl champion from the U.K.

Notably, defeating the Vikings on Sunday gives Ajayi the opportunity to become the first Brit to actually play in an offensive snap in the Super Bowl.

As an English native, I recognize that this milestone holds certain significance for any fellow Brit interested in the NFL.

The sport of ‘football’ remains something of a beautiful confusion for many British people, but figures such as Jay Ajayi could inspire a generation of future NFL athletes to come.

Back 2 Back 1 Last Time ft. Deion, Shedur, and Shilo Sanders