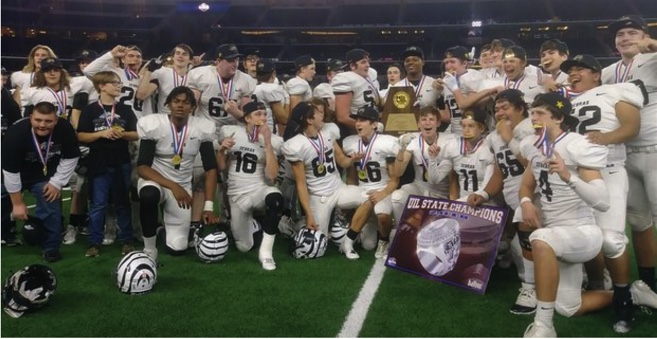 For the first time in program history, the Grandview Zebras are state champions with a 35-21 win over Malakoff.

It all came down to the rematch. Grandview handled Malakoff 28-6 in the opening weeks of the season. Since then, Malakoff had run off a 13-1 record. None of that mattered as in the end, Grandview’s defense proved too tough for the Tigers once again.

It was a defensive battle early as both teams traded back to back punts for much of the first quarter. It quickly became apparent that the Zebras weren’t going to run away this time. It was the Tiger defense that struck first as Kaderrious Thomas took an interception to the house with 3:34 left in the first quarter to put Malakoff on the board 7-0.

Grandview drove down the field in a hurry, tying it up in the opening seconds of the second quarter off a Dane Jentsch throw to Cooper Deans for a four-yard touchdown.

Then, the floodgates opened.

Within two minutes, Malakoff quickly responded as Keevie Rose punched it in from a yard out to put the Tigers back on top 14-7. The Zebras weren’t backing down and the Tiger defense was on it’s heels while Jentsch commandeered his team down the field. With 7:09 left in the half, Jentsch punched it in himself to tie it back up.

After the defense came up with a late stop, the Tigers made a crucial mistake, muffing the punt, giving the Zebras the ball, and momentum, late in the half. Within seconds, Grandview capitalized as Jentsch found Jacob Patterson for a 53-yard touchdown for Grandview’s first lead of the night.

After trailing for most of the half, the Zebras had the lead and momentum. Needing a score before halftime, Malakoff was sliding and Ryan Schronk ended any hope of a tie game at halftime with an interception in the closing seconds.

Grandview opened the half with back to back punts, unable to take a commanding lead. Luckily for the Zebra offense, the defense wasn’t letting the Tigers get back in the game. That was, until Dorian Pearce found Andreas Garrett for a 44-yard touchdown to tie the game back up at 21 with 2:49 left in the third quarter.

Grandview needed a momentum swing back their way and got it in the opening seconds of the fourth quarter. Jentsch converted on fourth and two to give the Zebras the momentum once again. Then, with 9:53 left in the game Elijah Golden found gold to put Grandview back up 28-21.

The touchdown sent the Tigers into a panic, who now needed a score to stay in the game. Malakoff’s offense was getting bailed out by defensive penalties but couldn’t capitalize and on fourth down near midfield, the Tigers’ waning breath came up short.

Grandview wasn’t finished just yet. The Zebras drove down field and in the final seconds of the game, Jentch found Dametrious Crownoveron a jump pass for a 15 yard touchdown to put the dagger in Malakoff, 35-21.