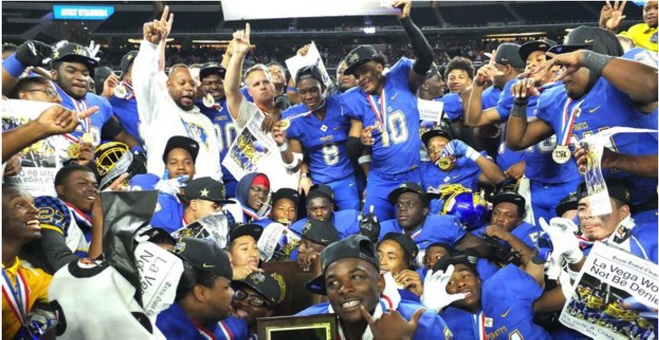 Waco La Vega survived a late comeback attempt to win the 4A-DI state title. The Pirates pulled away in the third quarter, only for the Panthers to post a furious comeback that came just short.

It was a tale of two halves for La Vega. The Pirates struggled in the first half, unable to adjust to the Liberty Hill wishbone offense and gritty defense. Then, in the second half, the Pirates figured it out and exploded. In what on paper was an evenly matched game, these two teams couldn’t have been more different if they tried.

La Vega and Liberty Hill both depend on a run heavy offense. That’s where the similarities between the two teams stop. La Vega is fast, efficient and doesn’t drain chunks of time. Liberty Hill runs out of the wishbone offense, and they specialize in draining chunks of time. Early on, the Pirates were holding their own in foreign territory. After holding Liberty Hill to a three-and-out on their first drive, the Pirates showed their speed as Jar’Que Walton burned the Panther defense for a 35-yard touchdown with 8:20 left in the first quarter.

Then Liberty Hill did what they do best: they slowed the game down. The Panthers were pounding the ball down La Vega’s throats and just when it seemed like the Pirates had shut them down, Liberty Hill turned to the air, where two big completions gave the Panthers a chance to tie the game. Running back Kyle Harrisondid the rest, carrying it in from six yards out, tying La Vega 7-7 to open the second quarter.

Offensively, La Vega was quick, but Liberty Hill’s run defense was flying around. Defensively, the Pirates were helpless to the Panthers’ wishbone offense, and could only watch as Liberty Hill’s offense trudged down the field as time ticked down on the half. At halftime, the teams remained locked in a defensive battle, 7-7.

La Vega came out of the half with a new fight. The Pirates’ offense had sputtered for most of the first half, so Donte Stuart cut the middle-man out completely, returning the second half kickoff 94 yards for a touchdown to retake the lead.

The Pirates offense made the necessary halftime adjustments, knowing they’d need to score quickly. On their first offensive possession, Malachi Wright took a curl 90 yards to the house to put La Vega up 21-7. After entering halftime tied 7-7, the Pirates now led by two scores and had broken two 4A records in just under five minutes out of the break.

The Pirates had all the momentum and they weren’t slowing down soon. The Pirate defense came up with their first turnover of the game, recovering a muffed Liberty Hill handoff. Ara Rauls and the Pirate offense were in full control spreading the defense and exposing the Panthers’ mistakes. Rauls connected with Wright for the second time, hitting the receiver in stride for a 61-yard touchdown with just 1:28 remaining before the final quarter.

The Panthers were refusing to change their style of play. They were sticking by what they knew and it worked. With 8:48 left in the game, Liberty Hill ended their scoring drought with a touchdown to make it a two-score game.

John Richardswasn’t going to let the Panthers stay within striking distance. Without a touchdown to his name, the senior back powered his way into the end zone from 43 yards out to make it a three-score game once again with just under seven minutes left in the game.

The Panthers weren’t in any rush, but they weren’t giving up on their chances. With 2:59 left in the game Cearley punched it in from four yards outs. With the game still not out of reach, Liberty Hill’s ensuing onside kick failed. However, Liberty Hill wasn’t done yet. With just a minute and a half left, the Panthers recovered a fumble and attempted a furious comeback. Liberty Hill got all the way inside the Pirate 30-yard line, before a sack killed their drive, and hope, of a state championship.