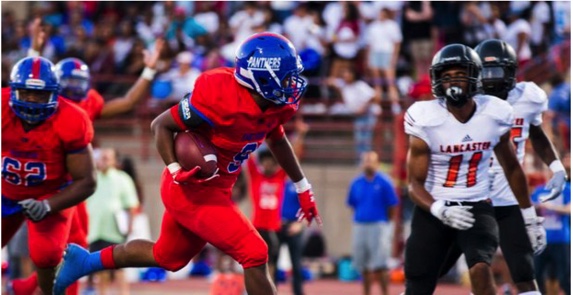 Statement made! The Panthers proved once again that the road to the state championship runs through Duncanville with a 51-7 win over Southlake Carroll. Duncanville put a hurting on a Southlake Carroll that entered the game undefeated. The Panthers overcame a slow start before an offensive explosion in the second and third quarter put the game away.

It was a back-and-forth defensive battle early as both defenses came to play. After jaw- dropping hits and multiple punts, the Panthers rose up first, as QB Ja’Quinden Jacksontook it himself for a 15-yard touchdown for a 7-0 score at the end of the first quarter.

The Dragons opened the second quarter with a promising drive of their own but the drive stalled and they missed the field goal. The late drive woke the Panthers’ offense and Duncanville capitalized off the Dragons’ missed chance with another touchdown drive as Jackson ran in his second touchdown of the night, this one from nine yards out and midway through the second, Duncanville held a 14-0 lead.

Southlake Carroll’s luck wasn’t changing on the ensuing drive as Will Bowerswas hit as he threw, forcing an interception that Anthony Cruz returned 14 yards for another Panther score, 20-0.

Down and needing a score before the half, the Dragons’ turned to 2020 four-star RJMickenswho came up with two big grabs on the ensuing drive including a 16-yard touchdown to bring Southlake Carrol within 13. Duncanville wasn’t taken aback and quickly erased any potential momentum swing as Jackson found Roderick Daniels for a 10-yard touchdown to put Duncanville up 27-7 at the half.

In the second half, the Panthers exploded.

Opening the half with the ball, Duncanville took advantage clawing their way back into the red zone and growing their lead as Trysten Smith punched it in from four yards out to put the Panthers up 34-7 with 9:13 left in the third quarter.

Looking to get back in the game, Will Bowersfound Mickens for a 54-yard gain but just inches from the goal line, Tre’Shones Devones punched the ball out for a touchback, giving the Panthers the ball on their own 20.

Duncanville couldn’t stop taking advantage of the Dragons’ mistakes, as Jackson ran in his third touchdown of the night, this one from 14-yards out to put the game out of reach with 6:13 left in the third, 41-7.

The points didn’t stop coming for Duncanville as they forced another interception on the ensuing drive and tacked on a field goal for a 44-7 lead late in the third. Then, just seconds from the final quarter, the Panthers’ defense forced their third interception of the night as Ennis Rakestraw housed the pick for a 54-yard touchdown to cap the Panthers’ night with a quarter left to play, 51-7.

Entering the fourth, it was all over for the Dragons and Duncanville pulled their starters and clinched a matchup with Allen on Saturday.

Southlake Carroll’s season ends at 13-1, in Riley Dodge’s first year as head coach the Dragons impressed all year but failed to come up when it counted. In a season full of Southlake Carroll blowouts, the Dragons got a taste of their own medicine in an absolute dismantling.