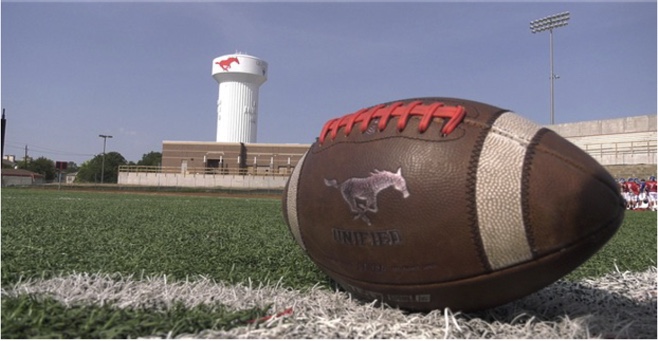 As Mustang-Panther Stadium undergoes renovation, so does the Grapevine football team.

The Old Coach Editor-in-Chief Nick Walters caught up with head coach Mike Alexander at Saturday’s practice to discuss everything Grapevine Football less than two weeks ahead of the 2018 season.

Following the departure of 4-year starter, now Texas Tech QB Alan Bowman, the burning question in Grapevine is if whether the Mustangs will hit their stride or fall behind in 2018.

One key factor in the equation is Bowman’s replacement, senior Cade Rhodes. Despite strictly being Bowman’s backup in 2017, Alexander expressed confidence in the first-year starter at Saturday’s practice.

“He’s just been waiting and waiting and doing everything he needs to do every day,” Alexander said. “[Last year] he was ready to step in for Alan at a moment’s notice.” Luckily for Rhodes, he will have the help from a Grapevine team that returns most of its skill players, including electric offensive weapon David Clayton.

Grapevine will have their first chance to prove Coach Alexander right in front of their home crowd on August 31st versus Azle.

Until then, the Mustangs will have to do what they have set their mind to doing all offseason — “Fight On.”