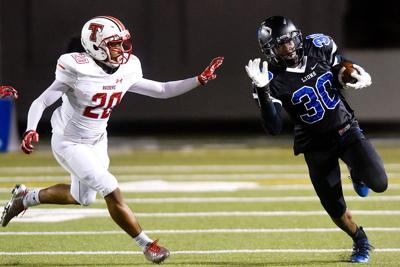 Tyler- A year removed from missing the playoffs, John Tyler made a statement in their return.

The Tomball defense forced a John Tyler punt on the opening possession of the game and the Cougars offense took over at their own 5-yard line.

The CUJO defense was able to hold Tomball to a field goal attempt, and Austin Hudgens connected from 26-yards out to give Tomball a 3-0 lead.

That would be the only lead the Cougars had during the game. John Tyler would score just two plays into the second quarter.

Devlen Woodsconnected with Roderick Hawkins, who weaves through the Cougars defense and raced 60-yards for a CUJO touchdown.

After forcing a Tomball punt, John Tyler began to march towards the end zone once again.

A 33-yard pitch-and-catch setup a 3-yard Cameron Grant touchdown run and CUJO extended their lead to 14-3 with 7:59 remaining in second quarter.

The Cougars offense put together a nice drive late in the second quarter.

Tomball got the ball at the CUJO 40-yard line after John Tyler was penalized for defensive holding. The Cougars would fumble inside the redzone and Roy Lampton recovered the ball for John Tyler.

Once again Hawkins found the end zone for the CUJO, this time on a run from 10-yards out.

Penalties forced three PAT attempts and John Tyler would score on a two-point conversion and take a 22-3 lead into halftime.

John Tyler would continue their dominance in the second half.

Lampton got his second defensive turnover of the game with an interception that set up the CUJO offense at their own 36-yard line.

Ka’Darian Asbell capped off the drive with a 8-yard touchdown run with 4:36 left in the third quarter and put John Tyler ahead 29-3.

Tomball would get into the end zone two more times on Jake Johnson and JayRis Smith receptions, but the damage was already done.

John Tyler will take on Lancaster (7-3, 6-1) Saturday at Memorial Stadium in Mesquite, kickoff is set for 2:00pm.