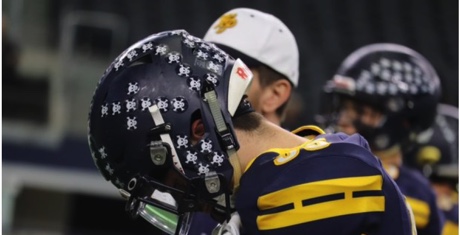 Highland Park didn’t lead for 47:51 of the game, they were down 35-14 at the beginning of the fourth quarter, they had no answer for the John Tyler offense in the first half, but it never mattered as the Scots overcame it all to defeat the John Tyler Lions 42-35 in the  final seconds of the game. Highland Park is now one round away from their third straight state title appearance and are one step closer to a three-peat. It wasn’t easy but the Scots never backed down, even after an unsteady first half.

The Lions came out roaring, marching down the field on their first drive of the game and jumped out to a 7-0 lead as Roderick Hawkins bowled over Scots’ defenders on his way to a 13-yard score with 8:36 remaining in the first quarter.

The Scots weren’t down long as QB Chandler Morrisorchestrated a drive that ended with an 18-yard touchdown pass to Colton Leonard to tie the game up with 6:54 left in the quarter. The Highland Park defense was impressive defending the pass but had no answer for the Lions’ ground game which racked up 288 yards in the first half alone.

Within two minutes, CUJO’s QB Devlen Woodsbroke loose, streaking 64 yards to put John Tyler up 14-7 with 5:04 left in the quarter.

After the early offensive breakout, both defenses woke up and at the end of one, John Tyler led 14-7.

Highland Park was skidding and though the defense was holding, the Lions’ backfield wasn’t going to be contained for much longer. Finally, the Scots got a break as Hudson Clark stopped the Lions in their tracks with an interception on the one-yard line. Morris and the Scots’ offense would have to go the entire length of the field if they wanted to tie up the game headed into halftime.

Sure enough, after a huge fourth-down conversion, Morris did it himself, escaping for a 31-yard touchdown to tie the game up with 3:46 left in the half.

After being held scoreless for most of the second quarter, the Lions needed a momentum swing before the half and they got it as Roderick Hawkins shot out of a cannon on fourth and inches, outrunning the Scots’ secondary for a 49-yard score with just a minute left for a 21-14 John Tyler led at halftime.

The Scots came out looking to catch John Tyler off-guard with an onside kick to start the half, but it backfired and the Lions marched down the field taking on to their lead with a Cam Grant five-yard touchdown run.

All of sudden, the Scots were in a hole and it would only got deeper. Woods was having himself a game and tacked on another touchdown late in the third quarter on an 11-yard QB keeper to put John Tyler up 35-14 with the final quarter remaining.

Highland Park was down but not out, with an impressive drive to open the fourth quarter which ended in a six-yard touchdown pass from Morris to bring the Scots within 14 points with 10:18 left in the game. The Scots comeback bid was not out of reach, and when Hudson Clark came up with an interception on the ensuing drive, things were finally looking up for Highland Park. The Scots turned it around within two minutes, as Morris found Bennet Brown for a 28-yard touchdown to bring the Scots within seven points.

Highland Park had all the momentum, and the defense rode it forcing the Lions’ first punt of the game midway through the fourth.

Penalties were killing John Tyler and with 46 seconds left, they turned it over, giving the Scots a chance at a walk-off victory.

Sure enough, with 11 seconds remaining, Morris found Finnegan Corwin for 45 yards to put the Scots at the 1-yard line. One play later, Morris punched it in himself and Highland Park had their first lead of the game 42-35. With just nine seconds remaining, John Tyler’s Hail Mary attempt fell short and the comeback bid was complete.

The Scots showed their grit, roaring back from a 21-point deficit to start the fourth and now advance to play the winner of Denton Ryan/Birdville. For John Tyler their season ends at 10-3 in heartbreaking fashion.

Duncanville stomps all over Southlake Carroll 51-7