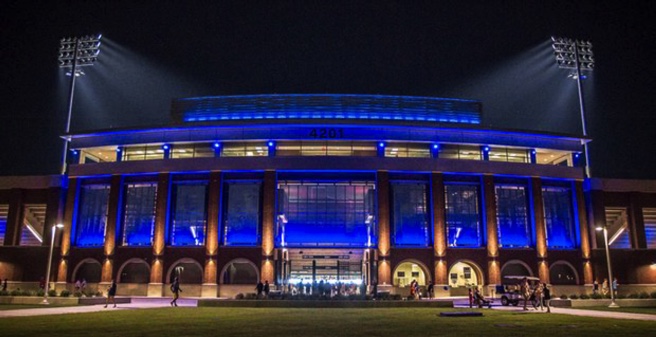 They say everything is bigger in Texas. After all, the state takes up more space than most countries.

Its high school football is no exception.

Multi-million-dollar stadiums sprout like weeds, grown men beat their chests in crowded bleachers, and “Friday Night Lights” is re-watched religiously. But even in a land where football reigns as king, some Texans are beginning to ask the uncomfortable question: Has it gone too far?

Some community members argue that the amount of taxpayer money being spent on high school football is exorbitant and reflects misplaced priorities in the state’s school system. This debate has resulted in conflict brewing across a number of districts, one of which being Grapevine-Colleyville ISD.

Since GCISD announced plans to begin construction on stadium renovations worth $18 million and a pair of indoor facilities costing a total of $32.8 million, frustrated taxpayers and students have taken to the web.

In an informal, anonymous survey distributed in February 2018, GCISD students complained about their district’s special treatment towards athletics and disregard to more basic needs.

One survey comment summed up the general tone of most responses: “NOBODY NEEDS A NEW FOOTBALL STADIUM!! WE WANT URINALS THAT FLUSH AND STALLS WITH DOORS.”

Another student wrote: “We could have spent maybe 1 out of the 18 mil we spent on our stadium to fix some of the major problems going on inside campus. It’s ridiculous and frankly an obvious picture of the system’s priorities.”

A survey responder who identified themselves as a district parent wrote: “Arts are more productive than athletics and deserve at least equal if not more funding.”

Grapevine High School assistant principal Ted Willmann understands the concerns about excessive spending but says athletic success instills a sense of community within a student body, making it worthwhile to invest in a football program.

“Any championship-caliber football program needs at least $100,000 a year to contend,” Willmann, a long-time coach, said. “We only get $20,000, not much more than other departments.”

According to Willmann, the zeros in front of the dollar signs are distracting taxpayers from the reasons behind the numbers. A five-year bond package approved in May 2016 supplied Grapevine-Colleyville ISD with nearly a quarter-billion dollars devoted solely to expenditures on construction of and improvements to public-use facilities.

“What some people don’t understand is that every dollar spent on stadium renovations and indoor facilities are from the 2016 Bond Program,” Willmann said. “Most complaints suggest using bond money in areas it could not have been spent towards in the first place.”

“GCISD had a good plan,” Colleyville Heritage head football coach Joe Willis said. “They had money that had to be allocated and used for certain reasons. That stadium fit that description.”

Football is blamed for being the flame that lit the debate over the district’s expenditures. However, while athletic fields are at the center of the bond program’s more expensive projects, football may be only half of the equation – or even less.

Willis describes the “multi-purpose facility” that is the renovated Mustang-Panther Stadium as a “centerpiece that shows that the community and the schools take great pride in their programs,” making it a “huge advertisement that our district is taking care of their kids.”

Grapevine head football coach Mike Alexander said renovations to the district’s stadium and construction of their indoor facility, or “The MAC” (Multi-Activity Court), was sometimes counterproductive to the team’s progress.

“You look around at all the construction, the MAC isn’t quite finished yet, we’ve been locked out of this stadium for the good amount of the semester,” Alexander said.

“Every day here has kind of been a challenge just knowing where we are going to practice and how we’re going to get things done.”

While burdensome restrictions put his team in a bind, including having to play home games at a neutral site, Alexander believes that the ensuing adversity positively impacted his players.

So much so that it influenced the Mustangs’ team slogan.

“We felt the motto of ‘Fight On’ has been appropriate this year,” Alexander said. “In life, you’re going to have some uncertainty. The goal is just to fight on.”

Despite the inherent upsides of having an indoor option on campus for programs in-and-out of the athletic department, a supporter of academics or fine arts may disagree with the allocation of GCISD’s bond package. However, money talks. And in a business decision delegating millions to an area of choice, football may give the district the most bang for its buck.

“It actually does bring money back into the district,” Willis said. “In fact, it’s one of the few programs that generates revenue. It’s over $100,000 depending on what year it is.”

Since overcoming issues with accommodations, each football program has used their indoor facility in ways the district envisioned since proposing the additions. This year’s high school football season was uncharacteristically wet in Texas, as an all-time record 28 inches of rain fell on DFW through the months of September and October.

“We went for about four years without having to go inside because of lightning. This year there’s already been five times we’ve had to come in,” Willis said. “It’s paid dividends as far as programs being able to get out of the weather and into a controlled environment.”

Two years after the passage of the bond responsible for their constructions, the MACs are finished products and Mustang-Panther Stadium is set to house both Grapevine and Colleyville Heritage sporting events beginning in Fall 2019. The social outcry heard by GCISD may be a sign of things to come in Texas as districts continue to pay top-dollar for success in football.

Later this month, the eyes of Texas will be glued on Arlington as tens of thousands file into AT&T Stadium to witness football state championships.

While most will be absorbed in the spectacle’s awe-inspiring aura, some will pause and ponder: “Is Texas High School Football too big?”