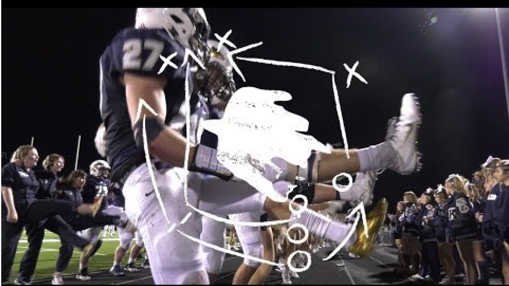 Keller overcame four turnovers in the first half to come back and clinch a playoff spot.

It was a tale of two halves for the Indians, who struggled early but made the necessary halftime adjustments to come back and defeat the Fossil Ridge Panthers. The Old Coach’s Nick Walterswas in-house to capture the comeback victory.

Fossil Ridge came out firing early and jumped out to a 14-7 halftime lead.

Led by quarterback Colione Evans, the Panthers struck within the first three minutes of the game. Evans found Scottie Colis for a 26-yard touchdown to put Fossil Ridge up 7-0.

Keller’s first turnover came on the ensuing drive as Fossil Ridge came up with a forced fumble deep in Indian territory. The Panthers couldn’t take advantage as they threw an interception and just seconds later, Indian QB Sloan Henry threw a 50-yard strike toDamon Smithto tie the game up.

Evans’ second touchdown of the night came on the ensuing drive as a big kick return by Wyatt Rhomer put the Panthers in prime position to lead. Sure enough, Evans punched it in from two yards out and at the end of the first quarter, Fossil Ridge was up 14-7.

Fossil Ridge’s defense continued to force turnovers picking off Henry three times in the second quarter alone. While the offense couldn’t convert turnovers into points, the Panthers defense did everything to preserve their lead.

At halftime, the score remained 14-7.

Fossil Ridge opened the second half looking to take control of the game, but a promising drive turned disastrous as Matt Dewitt came up with a pick six. The Indians weren’t done yet, adding a two point conversion to take their first lead of the night 15-14.

Both teams continued to flip the ball back-and-forth, unable to turn promising turnovers into points.

Finally, with 3:53 left in the game, Keller found an opening.

RB Enoch Ntochobo turned the jets on for a 63-yard rushing touchdown and the Indians increased their lead to 22-14.

Keller improves to 7-2 and clinches a playoff spot. They were down for much of the game, unable to get much working on offense, but the defense came up big in a lot of tight spots to help secure the win. Keller now looks forward to their regular season finale as the head to crosstown rival Keller Central.

For Fossil Ridge, a win would have given them breathing room in the playoff race. However, they now fall to 5-4 and 3-3 in district play with Eaton on the outside looking in at 2-3. Should Eaton win tomorrow, it’ll all come down to the season finale. The Panthers have a tough matchup against Guyer up next, while Eaton will need to. pull out all the stops against Southlake Carroll tomorrow. However, Eaton has a favorable matchup next week against Byron Nelson. With both teams favored to finish 3-4 overall, a head-to-head matchup favors Eaton, who defeated Fossil Ridge 30-28 early in district play.

The playoff race is on for Fossil Ridge, for Keller, they can afford to breathe as their season isn’t ending anytime soon.