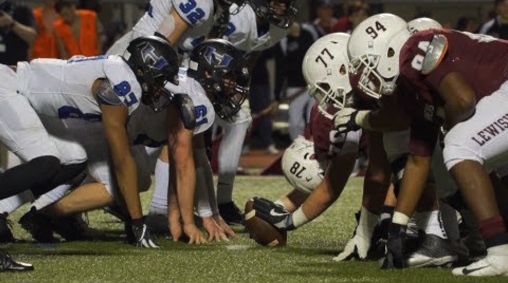 In a game that meant more than a district rivalry, Lewisville overcame a late push from Hebron to move to 7-2 and 5-1 in district play.

It was a defensive struggle early and the Farmers found the end zone once for a 7-0 score at the end of the first quarter.

After a slow first quarter, the second opened with a bang. The Farmers blocked a Hebron punt, returning it 65-yards to take a 14 point lead.

The Hawks weren’t going to go away easily. On the ensuing possession, Hebron drove 95- yards to come within one score, finished off by a 1-yard rush by QB Carson Harris.

The defensive struggle continued and neither team could establish a scoring drive until late in the second. With under two minutes remaining, Isiah Stevens caught a 31-yard touchdown and at halftime, Lewisville led 21-7.

Led by two top 2020 defensive prospects in Farmers’ CB Lorando Johnson and Hawks’ S Darius Snow, the defensive struggle continued into the second half. Neither team could get a drive going, exchanging punts, until Hebron found an opening. On fourth down, Harris found Colton Bradford for a 14-yard touchdown to close the gap 21-14.

They couldn’t hold on to the momentum and Lewisville drove right back down the field on the ensuing drive, opening the final quarter with a touchdown. With a chance to take a 14 point lead, the Farmers missed the extra point and led by 13 with 10 minutes remaining.

Both teams went back and forth, with the Farmers looking to run the clock out and seal the victory. Hebron had the ball, down thirteen with under two minutes remaining and needed a miracle if they wanted a win. In tough situations, Trejan Bridges shines. With seconds remaining, Bridges rose over two defenders, making an incredible toe-tap catch to give the Hawks some hope 27-21.

However, it was too little too late and the Farmers sealed the victory after a failed onside kick.

Lewisville improves to 7-2 and 5-1 in district play. They’ve officially sealed a playoff spot and now head into a matchup with a Marcus team that needs a win to move into the postseason.

For Hebron, they’re in contention with Marcus for the final playoff spot. Both teams sit at 3-3 in district play, but the schedule does Hebron some favors as they face 1-7 Irving next. With Marcus facing Lewisville, Hebron could sneak into the playoffs thanks to a favorable schedule.