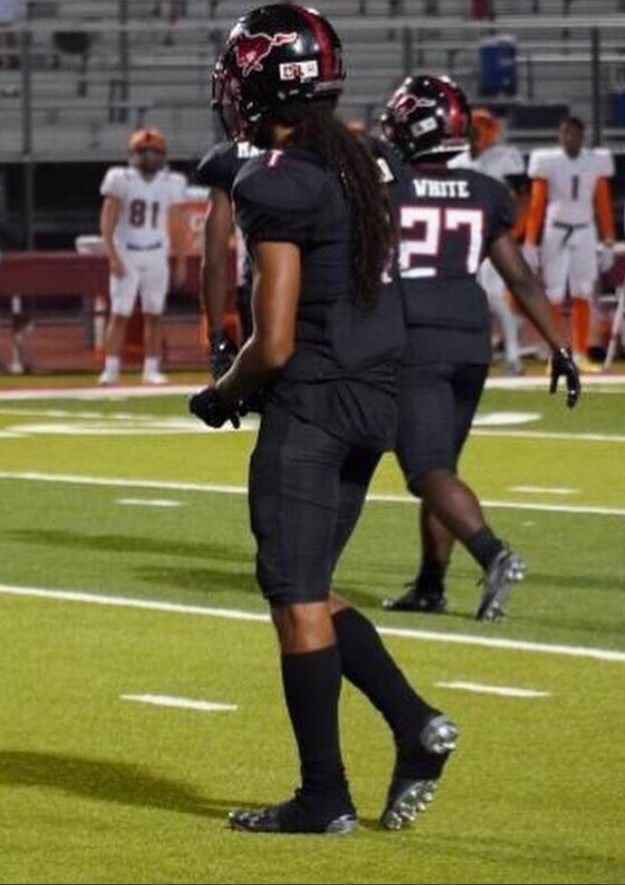 One of the most impressive teams this playoff season was the Manor Mustangs.

Manor started by dropping their first two games. They then went on a five-game run before dropping their last three to slouch into the playoffs at 5-5.

Manor, once in the playoffs though, really turned it on. They opened up 5A D1 playoff play with a one-point win at Dripping Springs. They then destroyed Porter 45-6. No November 8, district rival Cedar Park beat them by 25. In round three of the playoffs, Manor got their revenge 17-14. Manor made it all the way to the 5A D1 quarterfinals before finally falling to state champs, Shadow Creek to finish their season at 8-6.

One huge reason for their post-season success was the play of one of the state’s most underrated prospects, safety Devin Lemear.

Lemear for Manor last season was credited with 59 tackles, two interceptions and a tackle for a loss. Via the 247Sports Composite, he’s a three-star prospect. He’s ranked as the 76th best safety in the 2021 class and 153rd top player in Texas.

“I’d say my mindset and parents. I’ve never let people’s opinions bother me. I know the amount of work I put in, especially the work people don’t see and I really just trust and believe in myself. I say my parents also because they’ve always been here for me. They’ve reminded me to stay level headed and never settle and to keep working. All the hours of traveling playing sports finally paid off for me and them,” Lemear said on what leads to his success.

Lemear has received 20 offers to date. Some of which are from major power-five programs like Texas, Baylor, Mississippi State, Utah and Missouri among others,

“It’s a blessing. All of the hours of work I’ve put in starting from the age of three, just being surrounded by sports and dedicating my life to this finally paid off. It’s just a great feeling,” Lemear said.

Lemear and every other student-athlete who’s hoping to make it at the next level has gone through an unorthodox recruiting process. With there still being a dead period many kids have had to take to phone calls, face times, and virtual visits.

“Its been different but I can’t complain. I de-committed during the entire quarantine thing and that’s when my process really took off so it’s been good for me,” Lemear said. “For me, it’s been lots of zoom calls, facetime’s just trying to replace the missed visits I would have been taking at this time.”

Lemear back in January received an offer from TCU. Two days later he committed to the Horned Frogs. Back in April though, in the midst of this pandemic, Lemear re-opened his recruitment. Since then, 13 schools have offered scholarships to him.

Lemear has a bright future in front of him wherever he goes. For now, he still has one more year at Manor. After an outstanding junior season, he looks to improve even more in 2020.

“The goal is to win the district championship and then win state. We’re a young team with a new coaching staff coming in so there will be some bumps in the road, that’s for certain. But, I know we are only going to get better every week and we are going to win games. I’m really confident about the players and coaches we have so the future is bright at Manor,” Lemear said.

Lemear is an all-around stud. He can drop back in coverage to be the perfect center fielder or attack the gap after a running back who hit the whole. No matter where Lemear ends up that program is getting a winner.

“People should know I’m just your normal young kid who decided to put his mind to something and got to it. I dedicated my life to sports and plan on continuing that. But yeah, I’m your normal kid who makes mistakes but learns from them like anyone else,” Lemear said.