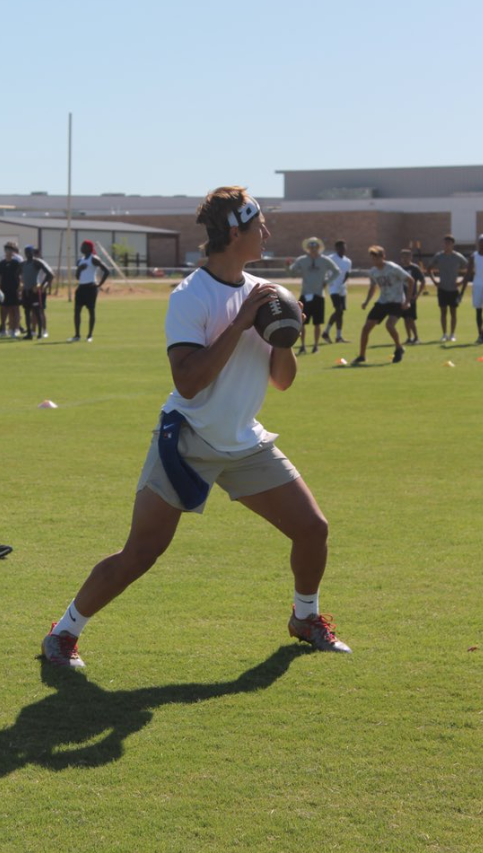 Quarterback Collin Drake and Ennis matched up against Red Oak, one of the most explosive offenses in all of 5A last year. Red oak even received a transfer in Duncanville quarterback, Chris Parson.

Ennis made Red Oak look as if they didn’t belong on the same field as them.

“It feels good to start the year off with a big win. We knew they were really talented, and we knew that we had to go play really tough and execute assignments in order to win. I think we did both of those things very well,” Drake said.

At halftime, Ennis led 31-0. They ended up defeating Red Oak 52-21. The Lions legitimately just blew out one of the best teams in all of 5A.

Drake on the day looked like a man on a mission. He completed two-thirds of his passes for 174 yards and two touchdowns while also rushing for 91 yards and a touchdown on the day. He was one of three Lions to have more than 90 yards on the ground.

“The coaches did a great job calling plays that set us up for success, and I have very talented players around me that pick up great blocks and make great catches,” Drake explained.

Drake was one of the best players in Texas last season. He led Ennis to a 12-2 record whilst bringing home a unanimous district 8-5A MVP for his efforts. Drake had 35 touchdowns and 3500 total yards last year as Ennis’s signal-caller.

Drake led the Ennis Lions to the state quarterfinals in 5A D2 last season but fell to the eventual state champion Aledo, 43-36 in overtime.

Now, Drake and Ennis want to back up their number one ranking.

“I don’t think there’s a ceiling on our potential. I think we can accomplish all that we want to if we play well. We have to take each week and each play one at a time, and we have to play really tough football. If we do those things, I think that we can accomplish our goals,” Drake said.

Ennis along with everyone faces difficulties this off-season due to the COVID-19 pandemic. Drake doesn’t believe it hindered their team as it affected every program this off-season.

“The off-season was unconventional because of COVID-19, so we weren’t able to have spring football and a traditional summer workout program. The situation was the same for any team though. The same cards were dealt to everyone, and we made it a priority to make the best of the opportunity we were given,” Drake said.

Ennis has won five state titles in football, most recently in 2014. They have easily one of the most loyal fanbases in all of Texas. Their home town travels in waves and makes any away game feel like a home game. It’s rather incredible.

Ennis after this win is the bonafide favorite in 5A D2. Can they keep this up? With Collin Drake and the rest of the boys playing this good, the answer is a resounding yes.

“It would be a great testament to how great this community is. We’re only in week one though. We’ve got a long time to get to mid-January, so it’s important that we focus on the next game ahead and focus on playing really tough,” Drake said.