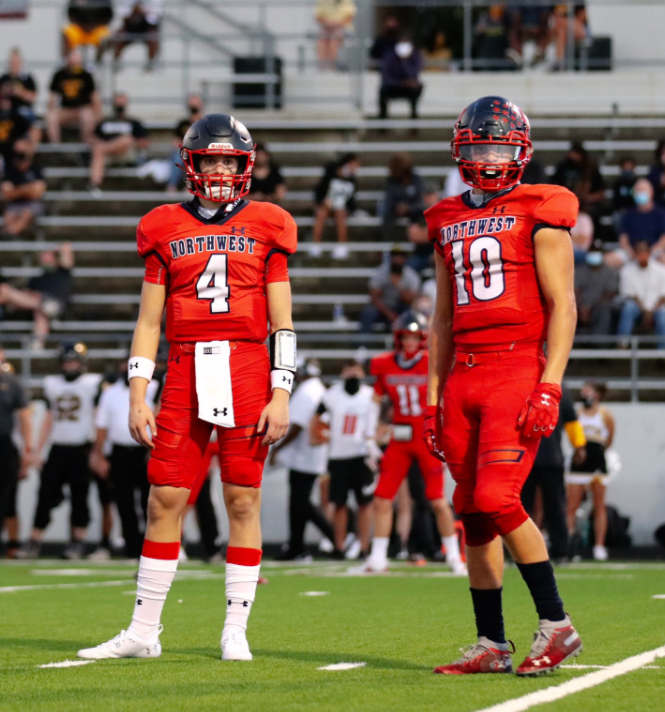 Jake Strong is the future of Texas Football. The Northwest quarterback got a little bit of playing time last season as a freshman. On Friday, the now sophomore led his team to a victory over Frisco Memorial on a game-winning touchdown. Not bad for his first start as a Sophomore.

“It was amazing. Family is everything to us and we played like one last night. We took it one play at a time and focused on doing our job,” Strong said.

Strong made the most of his opportunity. Facing a fourth and goal on the 29-yard line with 21 seconds left it appeared to be over. Northwest was down five points and Strong and company needed a miracle. He then took the snap and found senior Jak Poe down the sidelines to snatch victory from the claws of defeat.

It was the last offensive play of the game for Northwest. Frisco Memorial had too little time to do anything and in his first start this year, Strong already has a game-winning drive to his resume.

“My confidence level was high. I trusted my offensive line to do their job, which they had been all night. I knew my receiver would be in the right spot at the right time, and I knew the man upstairs had us taken care of,” Strong said.

Strong completed 65% of his passes for 185 yards with a pair of touchdowns and no interceptions. Strong also had 44 yards on the ground on five yards a carry. The 2023 QB was elite in the victory as Northwest starts its season 1-0.

“First and foremost, my teammates and coaches preparation and dedication,” Strong said on what led to his success. “Our coaches put together a great game plan that we went out and executed. My offensive line gave me all the time in the world to put the ball in the right spot, my receivers made immaculate catches all night, and our runnings backs ran the ball well too. Our success is credited to us as a team, not just me or any single player individually.”

Strong is a true leader, and one heck of a football player as well. The teams who will make it the furthest this season in the playoffs are going to be the teams who stay the healthiest and have the best leaders. Strong is showing he can lead Northwest to the apex of Texas Football.

Strong credits he and his teammates’ ability to adapt this off-season as a huge reason for their early success.

“This off-season was very different from what everyone is used to seeing. With that being said, my teammates and I just adapted, controlled the controllable, and seized every opportunity we had to get better. Most people viewed the season delays and setbacks as a bad thing, but we saw it in a positive manner and used it as an opportunity to keep preparing,” Strong said.

The sky is the limit for this program with Strong. If not this year, look out in the future cause Strong is about to put Justin Northwest on the map.

Strong though does believe that this 2020 squad can do promising things.

“The potential of our team is high. We have a phenomenal coaching staff surrounding us and great athletes as well. We just need to take it one week at a time and not get too focused on the future. We need to stay present in our situation and remain disciplined to who we are as a team, “We over me.”