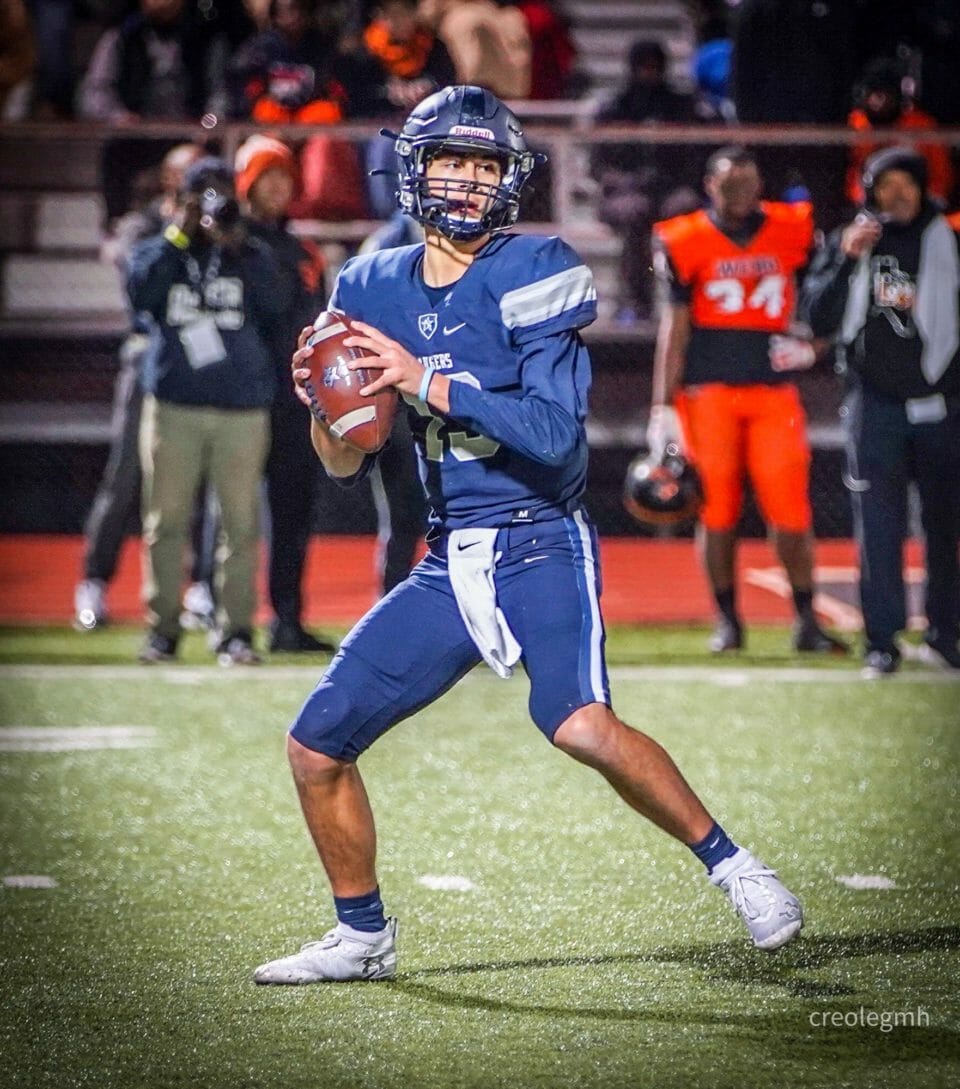 Frisco Lone Star was one of the most dominating football teams in the state of Texas last season. They’ve been on the precipice since 2015 when they reached the state championship game (5A D2.) Since then, they’ve reached at least 10 wins every year. 2019 however, seemed to be their year.

They had one of, if not, the best player in Texas with now Oklahoma Sooner, Marvin Mims. A loaded defense, and a star quarterback. They started the year off by shocking the powerhouse Highland Park Scots. They did so again a few months later in the playoffs. They looked to be the hottest team in Texas.

Until December 14, they fell to fellow unbeaten Denton Ryan to end their season at 14-1 and one game shy of a chance at the state championship.

Mims has since left Frisco for Norman. Jaylan Ford, a key linebacker, has moved on to Austin to don the burnt orange. If Lone Star wants to relive that success that they had it’ll be all on the shoulders of the star quarterback, Garret Rangel. Rangel after his electrifying season last year as a sophomore is more than ready to be the leader of the Lone Star Rangers for 2020 and beyond.

Rangel last season took over the starting quarterback job as only a sophomore. Like Braedyn Locke for Rockwall and Quinn Ewers for Southlake Carrol, Rangel experienced immediate success as well.

“It was a lot of fun beating Highland Park twice and my success came from the team and everything they have done for me,” Rangel said.

Rangel was a machine last year for the Rangers. He completed over 68% of his passes for 4,746 yards with 51 touchdowns in 15 starts.

In his first four playoff starts en route to the semifinals Rangel caught fire as well. He completed 68% of his passes for 14 touchdowns for nearly 1,400 yards.

“I’m always working on my craft, I have the mentality to be the best in all situations,” Rangel said on what contributes to his success.

Rangel in 2020 will lose his top weapon and now Oklahoma Sooner, Marvin Mims. Mims last season grabbed 117 balls for 2,629 yards and a ridiculous 32 touchdowns. Rangel doesn’t seem too worried though as he believes the Rangers will be as loaded as ever offensively in 2020.

“We are gonna miss Marvin, but we do have a lot of returning studs such as Trace Bruckler, Brandon Spencer, Tolu Sokoya, and Jaden Rios who are eager to fill Marvin’s shoes,” Rangel said.

Trace Bruckler was the most productive wide receiver outside of Mims last year with 56 catches for 828 yards and five touchdowns. He came out huge in the Rangers playoff game against the Scots when Mims was double covered most the night.

He finished with 14 catches for 183 yards inside Jerryworld in that game.

Lone star last season finished 14-1 with their one loss to being to Denton Ryan in the 5A D1 State Semifinals. That game ended up being Rangel’s worst of the year yet still had a completion percentage above 60 with 200 yards. Rangel believes they can have an even better run in 2020.

“It’s the same script as last year, just take it one game at a time and don’t let the moments get too bright,” Rangel said.

Recently, the world has entered a stage of national emergency due to COVID-19. We are currently still not 100% sure if the football season will start on time. Regardless the Lone Star coaches are doing everything they can to keep Rangel, and others in shape during this lockdown.

“Our coaches are sending us lifting workouts and track workouts to stay in top shape,” Rangel said.
Rangel currently has offers from Missouri State and Nevada. Expect the 6’2” soon to be junior to accumulate many more offers though as he still has two more years in Frisco. Rangel, already with a 14-1 career record, has a chance to rewrite history in Texas if he can keep performing at a high level.

No matter what happens with Rangel you can expect one thing.

Christian Marshall and the Wimberley Texans Believe 2020 is their year

Deuce Harmon Looks to Keep Guyer on top in 2020.