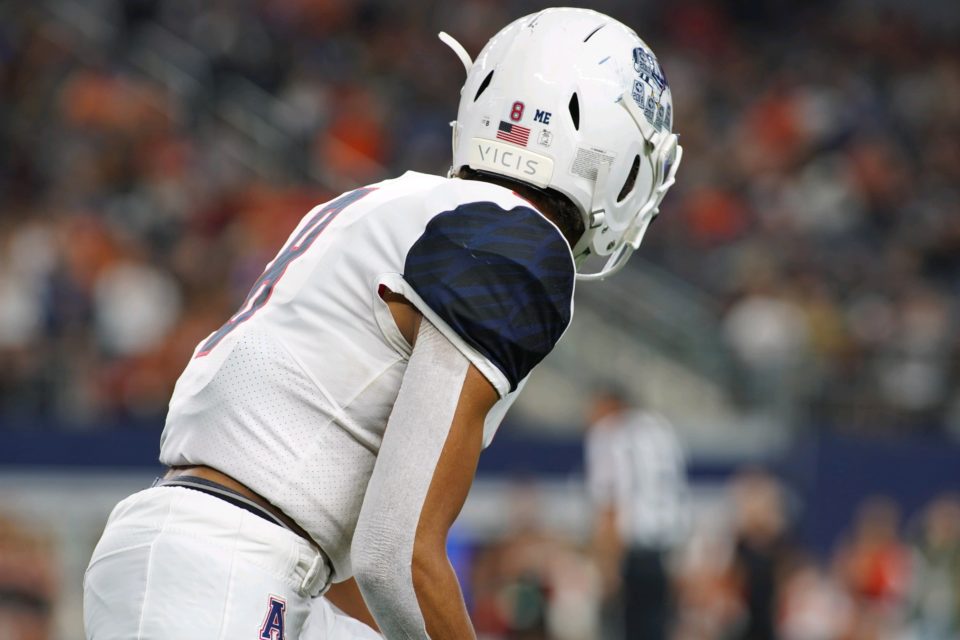 127 wins to six losses. That is the record of Allen High School football since 2011. A winning percentage of over 95%.

“It’s a culture of selflessness because it is built on grinding for something bigger than you and especially your brothers,” wide receiver Blaine Green said.

The Eagles have amassed four state titles since 2011, haven’t lost more than one game in a season during that span and have made it to the state semifinals every year but 2011 and 2019 during this run.

“Allen football is about family and knowing you can count on and trust the guy to the left and to the right of you, no matter what the situation is,” Bryson Green added.

Allen year in and year out are always a contender. A threat to win it all in the state of Texas. The school has produced a number of NFL talents such as Greg Little, Jonathan Williams, Steven Terrell and most notably Heisman winner and NFL offensive rookie of the year, Kyler Murray.

Last year, despite having a perfect regular season, was a disappointment for Allen. They lost in the Area round of the Texas 6A D1 playoffs to the dynamic duo of Braedyn Locke, Jaxon Smith-Njigba and the Rockwall Yellowjackets. The game was an instant classic inside Jerryworld as Rockwall won 60-59.

Locke put up over 400 yards passing and six touchdowns, with 258 yards and five touchdowns going to Smith-Njigba. The game ended when the Rockwall defense held their ground on a fourth-down run by Allen quarterback, Raylen Sharpe.

“It was heartbreaking as a team and as an individual everyone thought they could do more to win the game,” Blaine Green said.

Blaine finished with four catches for 91 yards and a touchdown during the shootout.

The loss marked Allen’s worst season since 2011 when they also went 11-1 and lost in the Area round of the playoffs.

Despite Bryson’s stress fracture, he and his brother were two of the top weapons in the Eagles offense last season.

Blaine finished with team-highs in catches, yards, and touchdowns with 55, 1,063 and nine respectively.  Bryson was right behind him with 36 catches for 503 yards and a pair of touchdowns.

“My Personal success is because of the people around me pushing to get me better and I hate being outworked by other people,” Blaine Green said on his success.

“My faith, God has blessed me with the ability that I combine with hard work to fine-tune my craft. My brother and I work continuously with our wide receivers Coach on being able to manipulate the defensive backs that we face,” Bryson Green added.

The Green brothers will enter 2020 as more than likely the top two receiving threats for the Eagles. Bryson Green when asked about what it’s like to play alongside his twin brother said the following.

“It is great, the defense cannot focus on one because it’s two of us. No matter what the down and distance are, they have to stay true, if they shade on his side, I can take a post to the house.”

Allen has made the playoffs every year since 2001 and has won its district title every year since 2006. In 2020 the Eagles aren’t only looking to reach the state semifinals, but they’ve got their eyes on a state championship as well, something they haven’t won since 2017.

“We had a lot of people leave this year so it will take a lot of trust and time to recreate those special bonds we had with other players,” Blaine Green said. “We will need to have that close-knit team mentality to take down the Duncanville and North Shores.”

“A dedicated group of guys that know the pain of getting knocked out earlier and will use that pain to drive training for the next run at a State Championship,” Bryson Green added.

The Green Brothers going into their senior seasons are both 4-star recruits via the 247Sports Composite. They each hold offers from Baylor, Minnesota, Auburn, Texas and Michigan State among others.

Before committing, they look towards making one more run at State for the powerhouse that is the Allen Eagles.

“As a part of the team look forward to me being more of a leader on this team but personally I will be one of the best high school wide receivers in the nation this year,” Blaine Green said.

“I will be a dedicated player that will keep the faith and continue to work hard to get a State Title,” Bryson Green added.