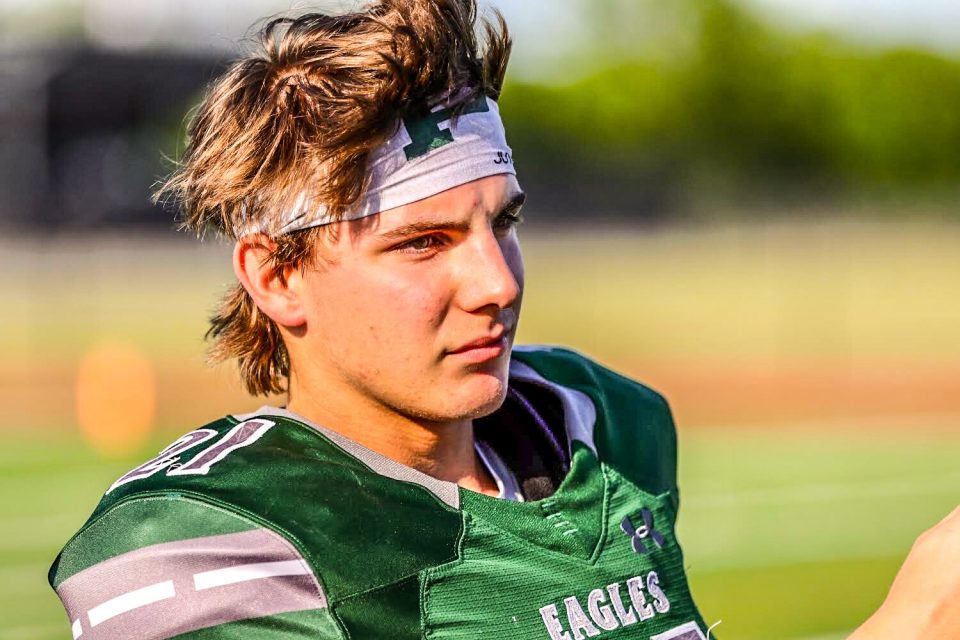 The world of high school recruiting is a wild one, to say the least. With so many amazing athletes in this state alone, it’s hard to evaluate each and every one.

Year after year elite players get left in the dust and either don’t receive any offers or are criminally under-recruited. It doesn’t help either that COVID-19 has essentially shut down the country. No school, no sports, no recruiting.

Meet one of the most under-appreciated players in all of Texas, Prosper High Schools dual-sport athlete, Ryan Medeiros. On Friday nights, Medeiros is the unsung hero of the Eagles defense. A defense that let up just under 20 points a game last season en route to a round four appearance In the Texas 6A D1 playoffs.

In his off-season from football, Medeiros is a stud on the baseball diamond as well. He hit nearly .400 as a sophomore, his junior season was unfortunately robbed from him and thousands of others due to the COVID-19 pandemic.

Medeiros, under the bright lights of the Children’s Health Stadium, helped the Eagles reach an 11-3 record and a deep run in the Texas 6A D1 playoffs.

“I believe what led us to success last year was the brotherhood we had, every single one of us was close and would always be there for each other,” Medeiros said.

Medeiros as a junior was electric on defense for the Eagles. The 6’ 185-pound safety finished Prosper’s stellar year with more than 60 tackles, three passes defended, three tackles for a loss, and an interception. He notably, took a 110-yard missed kick all the way to the house in the second round against Mesquite.

The Prosper Eagles this upcoming season will lose key starters on the offense such as wide receiver Hayden Metcalf and tackle Jake Majors. Yet, they return Medeiros, star linebacker Aidan Siano, and defensive lineman, James Eckrote.

On six occasions the Eagles defense held their opponents to single digits. They even started off their round four matchup against Rockwall with a pick-six to put them up 14-0 early.

“I learned within our defense that if we stay within ourselves self we will do just fine, we don’t need people going out of there way to do someone else’s job,” Medeiros said.

Medeiros is the anchor of the Eagles defense. Medeiros no doubt got that innate ability to sniff out opposing offenses and have an eagle eye due to his play in the outfield in baseball.

“It’s a tight schedule trying to balance out both sports, but that’s what makes it so fun. I have to make time to practice both though very often,” Medeiros said.

“Playing outfield helps tremendously it’s playing safety with reading how the ball spins and comes down. That is the reason why I was the punt returner because it was just natural for me to read the ball so well,” Medeiros added.

Medeiros is currently receiving some attention in baseball from Houston and Louisiana Lafayette.

Medeiros is making sure to stay in peak shape during the COVID-19 pandemic and looks to take things up a notch in 2020-2021.

“Fans of Prosper should expect more than last year with so many returning starters. Even though many think we are down at some positions we always find a way to bounce back in those spots with our great coaches,” Medeiros said.

Ryan Medeiros through his electric play on the football field coupled with his steady bat in baseball is easily one of the most under-appreciated athletes in the state of Texas. Whether it’s in Football or Baseball, some college is going to get an absolute steal in Medeiros.

“People should know that I’m a very hard worker and if someone needs something to be done not just for me but for the team I will make it happen,” Medeiros said. “Also that I’m a great teammate and always have a positive outlook on everything.”