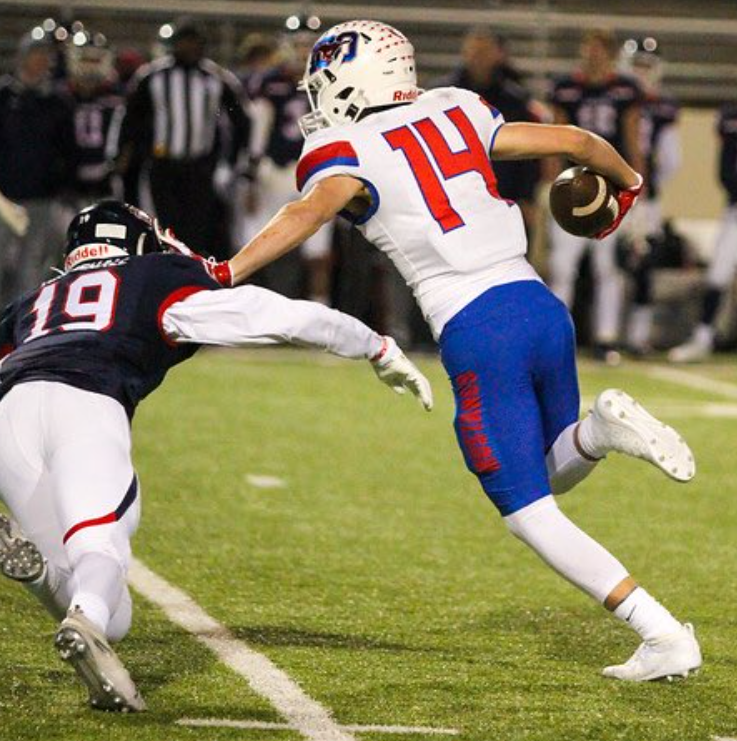 If you’re looking for an underrated talent that was overlooked this past year, look no further than Grapevine’s Ben Gair. If you’re hoping that underrated talent can sign to your alma mater and become the next big thing, you’re out of luck. Last night, Gair announced he was committing to Texas Tech for the 2021 season.

“I felt that Texas Tech was the best all-around choice for me,” Gair said. “Obviously I want to play football for as long as I can, but I also understand that you can’t play this game forever. I wanted to go somewhere that set me up for life after football and I felt Texas Tech did that for me.”

Texas Tech gained two wide receivers last night as along with Gair, they also gained a commitment from Argyle’s Cole Kirkpatrick. Gair and Kirkpatrick both had incredible seasons last year for their respective programs.

Gair for the 10-4 Grapevine Mustangs hauled in 67 receptions this past season for 861 yards and 13 touchdowns. Grapevine with Gair possessed one of the more prolific passing attacks in football this past season. The Mustangs averaged nearly 41 points per game and made a run to the regional semifinals in the 5A D2 playoffs.

“I would say my work ethic and determination,” Gair said on what leads to his success. “Once I set my eyes on something there’s no going back, no matter what the feat is. I live by the quote ‘it’s not the dog in the fight it’s the fight in the dog’ and I believe that’s why I am where I am today.”

Like Wes Welker more than 20 years ago, Gair enters Lubbock as an unknown recruit. Outside of his PWO offer from Texas Tech, he received other offers from Lamar, Missouri S&T, Southern Arkansas, Stephen F. Austin, and Texas Permian-Basin.

Just because he was underrecruited, don’t count out this 6’0 185-pound speedster. He has legit 4.4 40-yard dash speed and was a first-team All-District selection last year for the Mustangs.

Gair however isn’t focused on the past, he’s looking towards the future. He has a plethora of goals for when he becomes a Red Raider.

“As far as goals I just want to come in and earn everything every day. I’m a believer in everything is earned and not given and that’s how I’ve gotten to where I am now, so I plan on doing the same at the next level,” Gair said.

Ben Gair leaves behind a great legacy at Grapevine. At a high school that features NFL player alumni such as Jack Brewer, Nick Leckey, and Cody Spencer, among others, Gair looks to add his name to that list. If and when he gets there, he’ll have Texas football to thank for it.

Gair wants his fans at Grapevine along with his future fans at Texas Tech to know a few things about him before he becomes a household name at the next level.

“That I’m the hardest worker around and I’m going to achieve anything I set my eyes on. I will give everything I have to this program and I can’t wait to see what the future holds!”