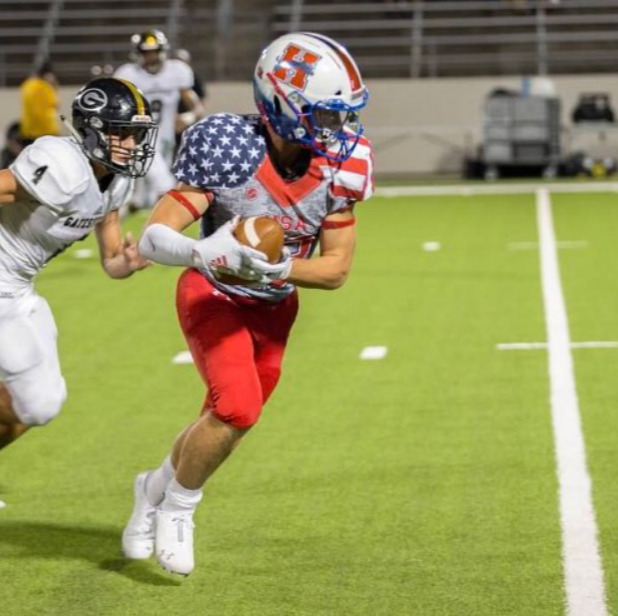 For the first time in program history last season, Midlothian Heritage made it to the fourth round of the playoffs.

They entered the dance at 6-4 and came away from the bi-district round in 4A D1 with an overtime victory against Henderson. They followed that up with wins against Navasota and Palestine. They ran into a brick wall when they came up against eventual undefeated state champions Carthage, but nonetheless, a 9-5 season for the upstart Midlothian Heritage Jaguars.

One reason for their success, and expected continued success is star wide receiver, Haydon Wiginton.

“It was a huge honor seeing that I was named the pre-season MVP, especially since our new district is loaded with talent,” Wiginton said.

Last year, the Falcons finished second in their district as they went 4-1. It should’ve been 5-0 but they had to forfeit a win and thus the district title to Crandall for using an ineligible player in their 23-7 win against them.

Wiginton though can hold his own. Last year, he recorded 52 catches for 846 yards and seven touchdowns for the Falcons.

“The coaches at Midlothian Heritage are the only reason I’ve ever succeeded in anything athletics-related, especially my dad, who is also my head coach.

Lee Wiginton has been coaching at Midlothian Heritage since 2010 and has a record 0f 140-82 in his coaching career.

Dissapointly, Wiginton hasn’t been that hot on the recruiting trail. He has an offer from Southwestern Assemblies of God University but that’s really it for the man who can run a 4.54 forty-yard dash already.

“Recruiting has been stressful, I’m going into my senior year with no clue where I’ll be able to play in college, but all of that is out of my control, and I trust that God will put me exactly where he wants me,” Wiginton said.

Wiginton is one of the best players in all of 4A. Coaches, hurry up and give this stud an offer.

Midlothian Heritage won’t have it any easier this season as they welcome 4A powerhouse Waco La Vega to district play.

Wiginton though isn’t worried at all. He’s going into 2020 as confident as ever.

“I want nothing short of a ring. We’ve gone deep in the playoffs every year our school has been open, and us seniors have one more ride, so why not go win it all? We have everything we need to do it, and nobody wants it as bad as us,” Wiginton said.

Haydon Wiginton is a monster on the football field. A guy who catches everything thrown his way. Midlothian Heritage has been getting better and better each and every year they’ve been around. So, why not them?

“The fans should know that I grew up on football and I eat, sleep, and breathe it. You’ll never find someone more passionate about the game of football. For me and my family, it’s a whole lot more than a game,” Wiginton said.